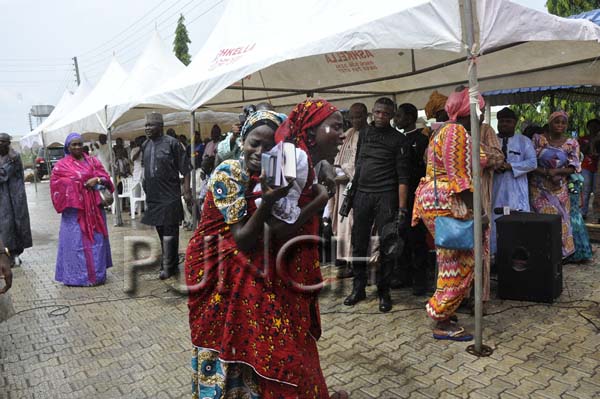 Emotions ran high on Sunday in Abuja when parents of the 21 Chibok girls, who were released by Boko Haram militants on Thursday, reunited with their parents at a thanksgiving service.

Parents and a few invited guests shed tears as the few lucky girls, who were among the over 200 schoolgirls of the Government Secondary School, Chibok, Borno State, kidnapped on April 14, 2014, locked themselves in warm embrace.

The thanksgiving service held at the Department of State Services health facility, located along the Airport Road, Abuja, to mark the release of the girls.The guests and the parents cried the more when the 21 girls claimed that they were not fed for “one month and 10 days’’ while they were in the bush.

Gloria Dame, one of the rescued girls, who spoke while giving testimony on behalf of her colleagues, said they survived through divine intervention.

The Minister of Information and Culture, Alhaji Lai Mohammed, and Minister of Women Affairs, Hajiya Jummai Alhassan, who attended the service, wiped their faces several times while listening to Gloria.

The girl, who spoke in Hausa language, said, “I did not know that a day like this will come that we will be dancing and giving thanks to God among people.

“For one month and 10 days, we stayed without food. I narrowly escaped a bomb blast in the forest.

“We are praying to God to touch the heart of Boko Haram to repent and we are calling on Nigerians to pray and fast for the release of our remaining ones in captivity.”

The parents of the freed girls arrived at the venue while the service was ongoing.

Their arrival changed the atmosphere in the service with many parents rolling on the floor as soon as they sighted their children, who they have not seen for about two and a half years.

Some parents bust into uncontrollable tears.

One after the other, the parents took turn to address the congregation and thanked President Muhammadu Buhari and all Nigerians for their efforts and prayers towards the rescue of their daughters.

The Chairman of the Chibok Local Government Council, Mr. Yaga Yarakawa, said the release of the girls was “historic’’ and the Chibok community at home and in the Diaspora was happy about the development.

Yarakawa said contrary to the views of some Nigerians, the 21 freed girls were the actual Chibok Secondary School girls kidnapped by Boko Haram.

He said, “Before their abduction, I was involved in supervising their feeding which was organised by the Borno State Secondary Schools Feeding System. So, I know them very well.

“These are the real girls and you can see when their parents came, you see their joy, it manifests naturally.

“This is enough to tell you that it is a reality and anybody, who says different things or doubting, may be the person has a different agenda altogether.”

He appealed to the government to put all necessary machinery in place to ensure the release of the other girls.

Also at the ceremony, Mr. Yakubu Nkaki, the Chairman of Abducted Chibok Girls’ Parents Association, thanked the President for the release of the girls.

He said from the physical looks of the girls, it was obvious that they had not been radicalised as claimed by some people.

Nkaki also debunked the claim that many of the girls were pregnant.

Also, the Minister of Information and Culture, Mohammed, appealed to commentators and analysts to refrain from making statements that could jeopardise the release of the remaining Chibok girls, who were still in captivity.

The minister made the appeal on Sunday in Abuja at the thanksgiving service.

“There are many reckless analysts and commentators, who are not helping the situation. We still have many of our children in captivity. Therefore, we have to be careful with the kind ofcomments that we make. We must not make comments that will make the release of these girls difficult or impossible,” he said.

Mohammed, who quoted from the scriptures (those who are with us are more than those who are with them), said those who doubted the sincerity and commitment of the present administration to the safe release and the reunion of the abducted Chibok girls with their parents were disappointed.

“When the President said the Boko Haram saga will not be closed until all the girls abducted have been released and reunited with their families safely, those who doubted did not believe us; so, we thank God this day has come,” he said.

Dr. Shiktra Kwali, who delivered the sermon at the thanksgiving service, told the girls that as they started a new life in freedom, they should not allow the experience of the past to weigh them down.

He urged them to remain steadfast in serving the Lord, who had not forsaken them even in captivity.

Several ministers of God, including the President of the Church of Brethren in Nigeria, Reverend Joel Bilili, offered prayers for the girls.

The parents took turn to identify their daughters while one of the women simply carried her daughter on her back in happiness.

Mr. Salman Gaphani, father of one of the girls, Deborah, who was full of gratitude to the Federal Government, said his daughter just got married and was pregnant before she was abducted by terrorists in 2014.

He explained that Deborah’s husband remarried sometimes later after the schoolgirl could not be rescued.

Jafa’aru stated that Deborah had earlier concluded her secondary school education and was at the Chibok Government School to re-sit her examination when she was abducted along with her colleagues.

He said, “Unlike the others, Deborah had already finished her secondary school. She did not make her papers and returned to re-sit her West African Senior Secondary Certificate Examinations when she was taken.

“She just got married two weeks before returning for her papers and they took her; her husband has remarried now. They abducted her while she was pregnant and she had my grandchild there, but I’m just grateful to God and the government for returning my daughter and grandchild to me safely, words cannot describe how I feel at the moment.”

Another parent, Madam Lawal, broke down in tears and hugged her daughter, Mariam, tightly while wiping away her tears.

Lawal was full of praises for Buhari and the security agencies for their efforts in rescuing her daughter.

“We are grateful to Buhari and all Nigerians for supporting us and ensuring the release of our daughters. We hope the other girls are rescued as soon as possible, so that their parents will have the opportunity to be as happy as we are today,” she said through an interpreter.

The father of Grace Gaphani, who was overwhelmed with emotions, said he had lost hope of seeing his daughter again.

He said he had entrusted his daughter’s education to the government, adding that he would permit it to send her abroad if the Federal Government had decided so.

He said, “I am grateful to God and Nigerians for not forgetting us. I had lost hope; I never thought that I will see my daughter again, but God returned her to me. I am so grateful to God for giving me another chance with my daughter.