The state government has released a statement denying claims that the Monkeypox virus is in the state. Read below…

The Attention of the Imo State government has been drawn to the wicked and unfounded rumor being spread by the wicked ones over the monkey pox virus which created undue anxiety in Owerri, the state capital especially among some parents, on Wednesday, October 11, 2017.

The State government wants to inform Imo people in particular and the general public that the monkey pox virus is not in Imo and will never be in Imo in Jesus Name.

The federal Government has named few states that have had one or two cases and the states that should be monitored closely and Imo State is not among any of the groups. So these wicked rumor mongers in the state will surely reap the ugly fruits of their ugly acts.

Again, no child or pupil or student has been immunized or is being immunized as part of the rumour had carried, because there is no need for such action.

However, the government is on the alert and will take the necessary action if the need arises and Imo people will duly be informed. But for now, there is no cause for any alarm. Imo is in the hand of God.

Chief Press Secretary to the Governor 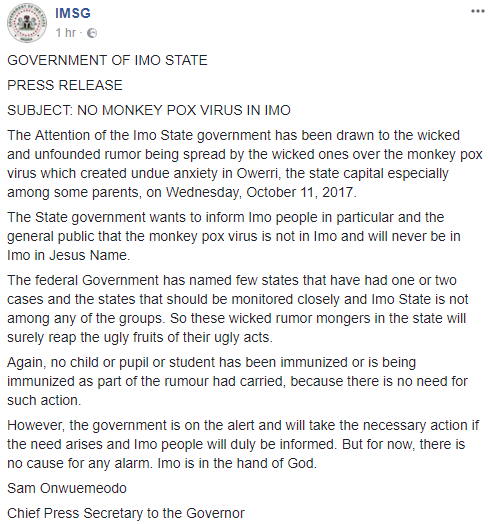