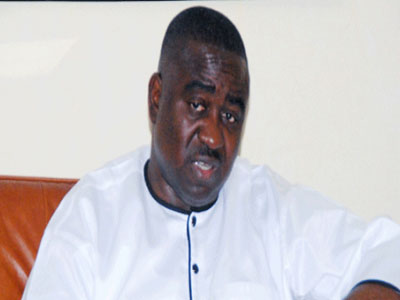 •Associates: he’s a man of peace

Former Governor Gabriel Suswam is being probed by the Department of State Services (DSS) for his alleged link with a militia leader, Terwaze Akwazza (a.k.a Gana), The Nation learnt yesterday.

The secret service is also investigating the ex-governor for allegedly building an armoury in his mansion, which is under construction in Makurdi.

Among those building the mansion, which is said to be close to the Ministry of Agriculture in the state capital, are three Israelis.

But a source close to Suswam yesterday said he suspected a frame-up by the ex-governor’s rivals.

Suswam was trying to meet bail terms as at press time. He has been in detention for five days.

According to a security source, who pleaded not to be named because he is not permitted to talk to the media, if Suswam is found to be innocent, the DSS will free him.

The source said: “The DSS is looking into the activities of a militia leader in Benue State, Terwaze Akwazza (a.k.a Gana) whose group has been terrorising innocent villagers.

“From security reports, the gang leader has held hostage three local governments – Logo, Katsina-Ala and Ukum. His group is running a mini-government in the affected local councils with locals paying obeisance, remitting funds and now even taking disputes to the group’s court.

“Although Akwazza initially embraced the Amnesty Programme of the state government, he later reneged and returned to his base in mountainous areas. It is from there that his boys have been killing and maiming innocent citizens.

“The situation in Benue, especially in the three local governments, is getting closer to how Boko Haram started and security agencies cannot sit idle without looking at all clues.”

Some indigenes of Benue have alleged that there is a link between Suswam and Akwazza. “At a point, we got reports that Akwazza boys were providing security for the former governor instead of the Police and the DSS,” the source said.

Besides,  it was alleged that the former governor was in touch with Akwazza even after the militia leader had been declared wanted.

“Detectives are probing whether Suswam facilitated an interview for Akwazza with a television station. There are so many angles to this case,” he said.

Detectives are said to have discovered that the militia leader was heavily armed during the 2015 general elections by some chieftains of the Peoples Democratic Party (PDP).

“But after the poll, the group became unbearable and started waging guerilla attacks on villagers  in Benue State.

“This is why we invited the ex-governor to explain his own side. We have not said Suswam is guilty. We are holding  him to assist our investigation,” the source said.

Security agencies are also investigating alleged building of an armoury by the ex-governor.

Three Israelis are said to be part of the project but we are yet to establish their role in the bunker,” the DSS source told The Nation.

The DSS on Sunday detained Suswam over the recovery of some guns, ammunition, and 45 keys of “exotic” cars from two vehicles linked with him.

As at yesterday, Suswam was battling for bail through his lawyers.

He has been allowed access to his wife and counsel to prepare his defence under caution.

Another source said: “The DSS has not molested him. His  wife brought meals for him on Tuesday. As soon as he meets bail terms, we will release him.”

But Suswam’s friends and associates have attributed his arrest to “bitter partisan politics in Benue State”.

One said:” I don’t have any fact, but I suspect that politics is at play. Suswam is not a violent leader; he has no basis for arming any militia.”

Another associate said:  “The DSS should go and read the handover note from Suswam to Governor Samuel Ortom where reference was made to the activities of Akwazza and his men.

“If Suswam was sponsoring the gang, he would not guide Ortom on how to tackle insecurity. It is all politics, despite the fact that the ex-governor has been cooperative with his successor.

“To demonstrate his commitment to peace, the ex-governor recently reconciled with Governor Ortom by visiting him. Suswam is a symbol of peace.”