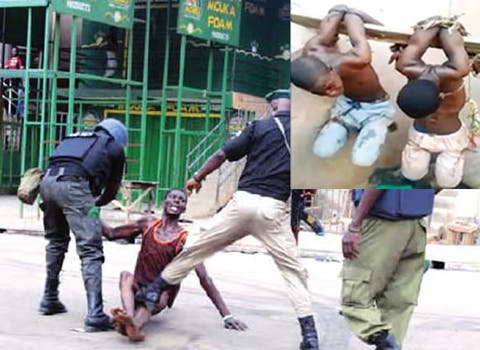 The stiff resistance by security agents to allow the #EndSARS protesters ingress into the Special Anti-Robbery Squad office in Awkuzu, Oyi Local Government Area of Anambra State, on Friday, might have heightened suspicion that the facility is a graveyard.

The protesters, it was gathered, had planned to search the facility following suspicion that certain suspects were killed and buried in shallow graves inside the compound housing the SARS office.

One of the protesters, who spoke on condition of anonymity said, “We were at the SARS office to exhume the bodies of some suspects killed and buried by the SARS people.

“We wanted to exhume their bodies so that their loved ones would know that they were dead and give them decent burial.”

But the state Police Public Relations Officer, Haruna Mohammed, justified why the place should not be accessed by rioters.

He said the office remained a police facility that should be guarded.

Mohammed said the place had been converted to an annexe of the state Criminal Investigation Department.

The Awkuzu SARS cell is reputed by Amnesty International as the most notorious in Nigeria because of human rights violation and abuse.

Corpses numbering about 35 were on January 19, 2013, discovered floating on the Ezu River at the boundary between Anambra and Enugu states in Amansea, Awka North Local Government Area of Anambra State.

‌A report by the International Society for Civil Liberties and the Rule of Law indicted SARS for killing and dumping the corpses in the river.

The rights group alleged that SARS of the Anambra State Police command was responsible for the homicide.

In the report titled: ‘The Untold Story of Ezu River Police SARS Killings’, the group said there was the need to highlight the activities of the outfit following the continued killing of Nigerian youths in the name of fighting crime.

The report signed by the Chairman, Board of Trustees, INTERSOCIETY, Emeka Umeagbalasi, condemned the use of force, torture and other unapproved ways to extract information from suspects.

The report was addressed to several authorities, including the Presidency and Amnesty International, among others.

In the report published in 2017, INTERSOCIETY said it decided to revisit the matter because of “increasing, shocking, saddening and alarming rate of torture and killing being perpetrated by SARS.”

“Many of the arrested and detained citizens by the Anambra police SARS operatives in the course of their so-called combating of violent crimes of armed robbery and kidnapping in the state were butchered like animals,” it stated.

The group insisted that instead of a drastic reduction in the number of deaths and torture, the SARS operatives had become deadlier and more menacing, “consolidating their atrocious practices of custodial torture and killing through their theatre of butchery.”

It added, “The amount of torture and killing going on at the Anambra police SARS headquarters at Awkuzu and its annexes or unit locations in the state is geometrical.

“Our first reason for issuing this special report is to draw the attention of the world, particularly the United Nations and its Human Rights Council, Amnesty International; Human Rights Watch, World Organisation Against Torture, and other rights groups and research bodies and institutions as well as the generality of Nigerians over the raging and untamed and unlicensed butcheries and cruel and degrading treatments perpetrated by Anambra police SARS operatives against detained citizens in their custody.”

Narrating his experience of SARS brutality in 2018, Udeogu Arinze of Umumeibe Street, Uru Umudim, Nnewi, in the Nnewi North Local Government Area of the state, described it as hellish.

He said, “On that fateful evening, my brother was coming back from work with three of our cousins. When they approached our family’s front gate, they saw five heavily armed men with no official identification except one of them, who was on a black T-shirt with the inscription ‘SARS’.

“At the scene, he noticed that they were men of the Special Anti-Robbery Squad. He looked around and saw some elderly men, youths and women from our compound lying down.

“My brother and three of our cousins gently approached the men and called one of them aside for a brief question. He softly asked him to kindly inform him what was going on, because many of those elderly men lying down were members of our families.

“The SARS man he was asking questions from surprisedly pointed his AK-47 rifle at my brother’s stomach and shouted: ‘Who are you to ask me a question? Do you think that we are just ordinary police officers? We are the SARS you have been hearing about’!”

He added, “Unfortunately for my brother, he jumped up and the SARS officer shot him the close range twice, with the bullet hitting his buttocks.

“My brother fell down uncontrollably. As soon as he was shot, the SARS driver reversed their bus and four of the operatives rushed in the bus and took off, while the guy that shot my brother started running to join them and eventually caught up with them at the entrance to our street.

“My brother was immediately rushed to the St. Felix Specialist Hospital belonging to the Catholic Diocese of Nnewi.

“Right now, my brother can no longer walk well; he’s jobless though he trained as a professional plumber. All his future plans have been aborted.

“My uncle, Mr Lawrence Udeogu, was among the elders forced to lay down that black Tuesday and he died a few days after as a result of the trauma.

“Those SARS personnel are still moving freely around the state as sacred cows.”

The stories inside the Awkuzu cell can be horrifying. People were alleged to be killed on trump up charges even in civil matters. Those who could not meet up the exorbitant financial demands of the SARS officers were allegedly tortured to death.

A victim stated, “When I eventually regained consciousness, I found myself in their death chamber called Cell 5. It is the cell that is reserved for those they will kill. Congested and extremely dirty. Food is not allowed in that cell unless for occasional loafs of bread, which are shared in slices, and there is only one bucket of water for drinking every day.

“The shock of my life happened on the second or the third day of being in cell 5. There was this small boy of between 19 and 22, a second-year Engineering student of FUTO.

“He used to call me uncle. He told me that he was the only son of his mother and that his supremely rich Lagos-based uncle wanted to annex his late father’s portion of the family land.

“His resistance against the uncle landed him at the SARS cell, where he was labelled a kidnapper and armed robber.

“Then, on the second or third night of my staying there, the door of the cell opened one night. What I saw was a torchlight.

“Names were being called one after the other; 17 names in all, including the small boy, and they were ordered out and the door shut.

“It did not take more than 15 minutes that the sound of gunshots filled the air, ‘Nne moh, nne moh’ (my mother, my mother) was all I could hear. The 17 young men were murdered in cold blood. I lost it that night. My system just shut down.

“It was either the 4th or 5th day that the door opened one morning and it was the same deputy, who called my name and told me to come out.

“No energy was left in me, because I had not eaten real food except occasional slices of bread. He bought me something to eat along with a malt drink. After some days, I was called into the leader’s office to see my wife and my lawyer.”

He said one the SARS leaders later became unusually friendly with him as a form of damage control, which gave him the opportunity to observe what obtained at the Awkuzu SARS office.

He said, “I witnessed some of the torture and I became aware of some of the cases along with what really happened in the place.

“I witnessed an incident when a young trader apprentice was arrested by SARS on behalf of the master over missing N250,000.

“The boy’s spinal cord broke and he died when he was subjected to what they call ‘hanging torture’. He was written off as an armed robber.

“I witnessed another incident during what they call verification or something like that. All the inmates were brought out in the open yard and forced to sit on the ground.

“When your name was called, you would stand up and answer some questions. There was this boy, who was called up and the leader asked him: ‘Are you from Ogidi?’ Before the boy could finish saying no, the SARS leader had shot him with a silver pistol, which was always with him. The boy bled to death right there.

“I also witnessed the practice of shifting inmates in the middle of the night to Nneni for the purposes of dodging official inspection of the place. The Nneni SARS annex is another abattoir. Starvation of inmates and outright shooting was the rule there. If the government undertakes the excavation of the perimeter of the Nneni annex, the Ezu River will be a joke compared to what will be discovered.

“I saw other killings at the place. Every morning, the inmates of cell 1 would be called to carry a dead body or two behind the torture hall. Any individual who had been detained by SARS for an extended period of time would tell you exactly that.

In a statement by its Media and Publicity Secretary, Emma Powerful, the Indigenous People of Biafra accused SARS Awkuzu of selling the body parts of murdered suspects to ritualists.

IPOB alleged, “We the global family of the Indigenous People of Biafra wish to bring to the notice of the international community the unabated secret abduction, torture, detention and killing of our members by the wicked Nigeria security agents.

“These callous beings in security uniforms also sell off the body parts of some of their victims to ritualists. At the helm of this atrocity and inhumanity is the Special Anti-Robbery Squad, Awkuzu.

“They have also been responsible for the disappearance of many innocent Biafrans, some of whom they have ‘wasted’, thinking they are IPOB members.”

But during one of the #EndSARS protests in the state, the protesters, who had an audience with Governor Willie Obiano, gave Nwafor’s sack as a condition precedent to their talk with him.

Obiano announced the sacking of Nwafor with immediate effect and gave an assurance of his prosecution for the alleged human rights abuses while he served as the SARS commander in the state.

There was wild jubilation in the state immediately after the governor’s pronouncement on the sacking of Nwafor.