Skip to content
You are here
The Abuja-Kaduna train service seems to be raking in alot of funds for the federal government at a critical period when all hands have been on deck to salvage the economy in the face of dipping oil revenue. 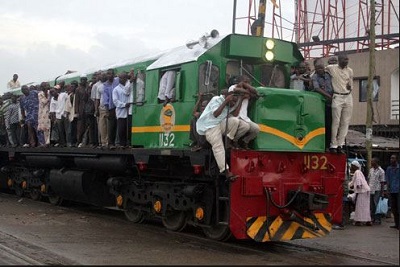 Ikhiria made this known to the News Agency of Nigeria (NAN) while travelling on the train from Abuja to Kaduna on Saturday. The Managing Director of NAN, Mr Bayo Onanuga and the Editor-in-Chief, NAN, Mr Ado Lawal, were also on board.

NAN recalls that President Muhammadu Buhari recently inaugurated the 1.46 billion dollars Abuja-Kaduna train service on the 26th of July, 2016 to boost transportation of goods and services as well as movement of people in the region.

Ikhiria said that he did not have record of the daily income of the service.“In the first week of operation, we made N2.2 million; in the second week, we made N2.9 million. This is the third week of operation; the last week report showed that we had almost 5,000 passengers in six days.

Ikhiria said that fencing of the tracks would commence before the end of August.

He acknowledged that there were some operational lapses on the route, and said that the management was working toward addressing them. He said that some of the staff had yet to get used to the seat numbering as it was different from what was obtainable in the previous trains.