There is a heightened anxiety ahead of tomorrow’s hearing in a treason case initiated against leader of the proscribed Indigenous People of Biafra (IPOB), Nnamdi Kanu, by the federal government, following what will become of his sureties in court as his whereabouts remains unknown. TUNDE OYESINA and AKEEM NAFIU report

Although there are a few cases rolled into one against the leader of the proscribed Indigenous People of Biafra (IPOB), Nnamdi Kanu, fate of his sureties will top one of the issues Justice Binta Nyako will determine in court tomorrow in one of the applications initiated by the federal government.

The federal government in one of the applications has asked the court to revoke the bail granted to Kanu in April on the ground of ill-health which appeared to have been allegedly breached by the IPOB leader since he was allowed home on bail.

But Kanu whose whereabouts had remained unknown since September 14 when the military allegedly invaded his Abia state residence, may have put his sureties on imprisonment path should he fail to show up in court tomorrow for the hearing of the felony case against him
A surety, under the law, is someone who has presented himself to guarantee the presence of a defendant who has been admitted to bail during trial.

While the Federal Government said that the sureties risked imprisonment should Kanu be absent in court tomorrow, IPOB is insisting that the FG is in the best position to tell the world where Kanu is, and as such, the sureties cannot be held responsible for his absence.

At the moment, it is being rumoured in some quarters that Kanu had escaped to the United Kingdom through Malysia. This is just as members of his group are alleging that it is the military that abducted him when it raided his home.

Kanu was arrested in October 2015 following allegations of treasonable felony by the federal government and was held in the custody of the State Security Service till January 2016 when the court ordered that he be kept in prison custody.

The Federal Government consequently arraigned Kanu and three others before a Federal High Court in Abuja on a five count criminal charge bordering on treasonable felony.

The trial judge, Justice Binta Nyako had on April 25 admitted Kanu to bail on health ground. As part of the bail condition, he was asked to produce three sureties, namely; a highly respected Jewish leader, a highly placed Igbo person and a respected person who resides and owns property in Abuja .

The Chairman of the Senate’s South East Caucus, Eyinnaya Abaribe; a Jewish priest, Immanuu-El Shalom and an accountant and Abuja resident, Tochukwu Uchendu, were Kanu’s sureties. Each of the sureties was asked to sign a bond of N100 million each.

However, speaking on the legal implication of Kanu’s failure to attend court on the next adjourned date, Special Assistant to President Muhammadu Buhari on Prosecution, Chief Okoi Obono-Obla, in an exclusive chat with New Telegraph Law in Abuja noted that Kanu has violated all the conditions prescribed by the court and government had sought the revocation of his bail.

He said: “Following the military exercise carried out by the military in Umuahia, Abia state and the subsequent proscription of IPOB, Nnamdi Kanu, has not been seen and may have gone underground.

“So, it is not likely that he will appear in court on the next adjourned date for fear of being arrested by the police or security agencies.

“Kanu had sureties that entered into recognizance or signed bail bonds as ordered by the court that led to his release.

“The position of the law as provided under Section 173 (1) of the Administration of Criminal Justice Act, 2015, is that, a defendant whom recognizance was entered on his behalf and who is subsequently released on bail is bound to appear before the court at every time and place to which during the course of the proceedings, the hearing may from time to time be adjourned.

“It follows that if Kanu fails to appear before the Federal High Court on the next adjourned date, the judge will likely order a warrant for his arrest.

In his own submissions on the issue, Chief Mike Ahamba (SAN) noted that it may be hasty to begin to deliberate on what may happen on October 17.

“Why should we be concerned about a surety who is not worried about himself? Let’s wait till that date. Kanu may even show up in court and if he did not show up, the court will decide what to do. I am not supposed to tell the court what to do”, the silk said.

To a former Vice President of the Nigerian Bar Association (NBA), Adekunle Ojo, the position of the law is clear on what happens if an accused person fails to show up for his or her trial without genuine reason.

“The sureties will be asked to show cause why they should not face the consequences of the accused person’s action. The defendant may have his bail revoked for not showing up in court to attend his trial. By the time the bail is revoked, the sureties may have to face trial for standing surety for an accused person that cannot be found.

“Primarily, their best bet is to ensure that Kanu attend court tomorrow because the consequences might be too great for them”, he said.

However, IPOB has faulted claims by the president’s aide saying they are capable of influencing the court’s decision.

In a statement by its spokesperson, Emma Powerful, IPOB said, “The fact that Nigeria government sued a person or group of people does not allow it to usurp the exclusive judicial discretion of the court or the trial Judge.

“One lawyer, called Obla in the Presidency was heard threatening jail on the sureties of Mazi Nnamdi Kanu as if he has assumed the position of the trial Judge in the court.

“It is important for IPOB to educate Nigerians to know that it is still in the discretion of the trial judge to tell the world on October 17, 2017 whether it is Nigerian Army which invaded the compound of Mazi Nnamdi Kanu and took him away or his sureties who were not even consulted by the Army before the extra-judicial invasion that should produce him in the court”.

Meanwhile, Kanu’s lawyer, Ifeanyi Ejiofor, had approached the Federal High Court in Abuja to direct the Chief of Army Staff, Lt.-Gen. Tukur Buratai, to produce his client in court tomorrow.

The originating summons which listed the Chief of Army Staff as the sole respondent was brought pursuant to Section 40 of the Federal High Court Act, F 12, LFN 2005 and Section 6(6)(1)(4) of the Constitution
The lawyer cited Section 40 of the Federal High Court Act which empowers the court to order that a Writ of ‘Habeas Corpus ad Subjiciendum’ be issued on the respondent, to produce the applicant in court, in view of the hearing of his case tomorrow.

Ejiofor submitted that Kanu is the Leader of the Indigenous People of Biafra (IPOB), a group largely made up of People from South-Eastern part of the country, mostly Biafra extraction; who are at all times materials lawfully exercising their constitutionally guaranteed rights to self determination, freedom of Association and peaceful assembly.

He further submitted that Kanu was arrested on the 14th day of October, 2015 and consequently arraigned in court along other defendants on the 20th day of January, 2016, on 11-count charge of treasonable felony, conspiracy to commit treasonable felony, belonging to an unlawful society, importation of goods, publication of libelous matters, etc.

“Six out of this eleven count charge had since the 28th day of March 2017, been struck out by the court, including allegation of belonging to an unlawful society.

“The applicant was granted bail on the 25th day of April, 2017, by His Lordship Hon, Justice Binta Nyanko.

“Hearing on the matter is slated to commence on the 17th day of October, 2017,” the lawyer said.

He further told the court that on the 12th September, 2017, the Nigeria military soldiers acting under express command handed down by the respondent, violently invaded the applicant’s home in Afara-ukwu Ibeku, Umuahia Abia State, wherein scores of his relative were brutally wounded and many killed.

In addition, Ejiofor submitted that on the 14th day of September, 2017, the Nigerian military led by soldiers of the Nigerian Army invaded Kanu’s house on a murderous raid, where life and mortar bullets were fired on unarmed and defenseless populace, leaving 28 persons dead and abducting many.

“The applicant who was in the house during this bloody onslaught by the soldiers, has not been heard from or seen after this bloody attack in his home by the agents of the respondent since the 14th day of September 2017.

“That the invading Soldiers in their desperate bid to ensure that the applicant is caught in the attack climbed stairs to his bedroom upstairs to shoot him; walls of his bedroom were riddled with bullets.

“The invading soldiers who had direct contact with the applicant on this fateful day (14th day of September 2017) should be in a position to produce the applicant before the court. It is either the respondent’s rampaging soldiers abducted the applicant during this raid or must have killed him in the process,” he further said.

In an affidavit in support of the motion deposed to by one, Prince Mandela Umegborogu, it was averred that on the 12th day of September 2017, Nigerian soldiers numbering about 200, armed to the teeth, invaded Kanu’s home in Afarauwku-Ibeku, Umuahia, in Abia State.

It was also averred that the invading soldiers were deployed to the South-East by the respondent in a covert operation tagged, ‘Operation Python Dance II (Egwu eke II), an exercise exclusively under the respondent’s command and control.

The deponent averred that the soldiers, who also drove in a purpose-built sophisticated armored personnel carrier, fired live bullets on the relatives of the applicant, leaving scores brutally wounded.

According to the deponent, on the 14th day of September, 2017, the soldiers invaded the applicant’s home for the second time and raid left 28 persons dead while over 48 persons were arrested and taken away to an unknown destination.

He said Kanu was sitting inside his bedroom when the soldiers invaded his home and that by virtue of this contact, the soldiers must know where he is at the moment, his fate and state of health. 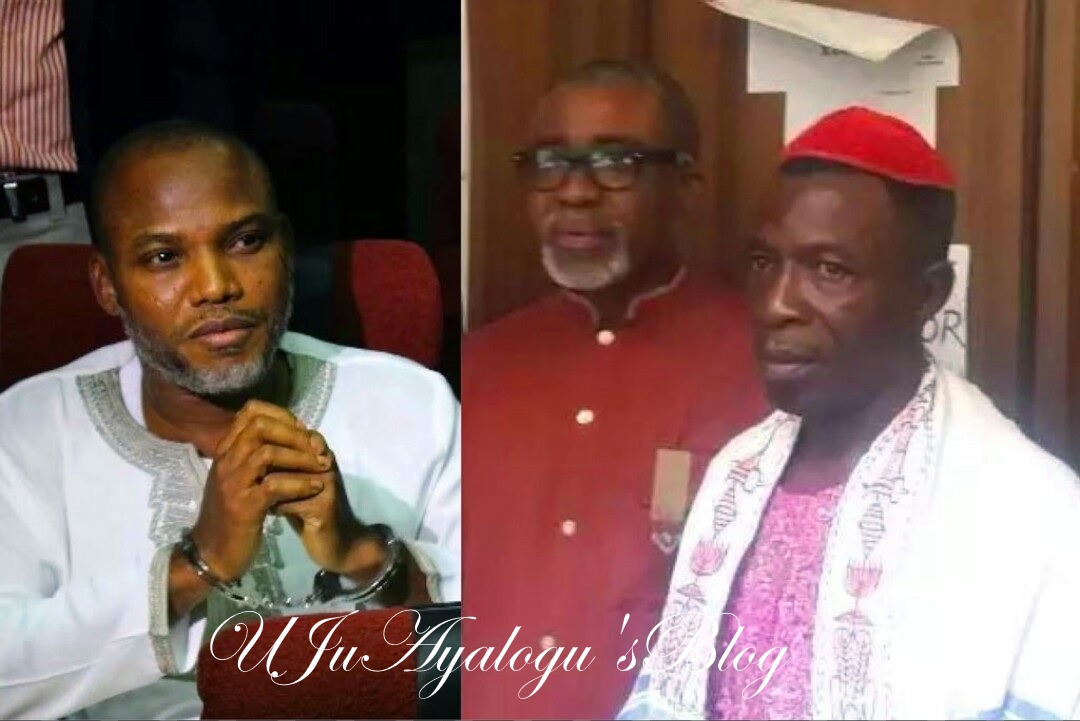