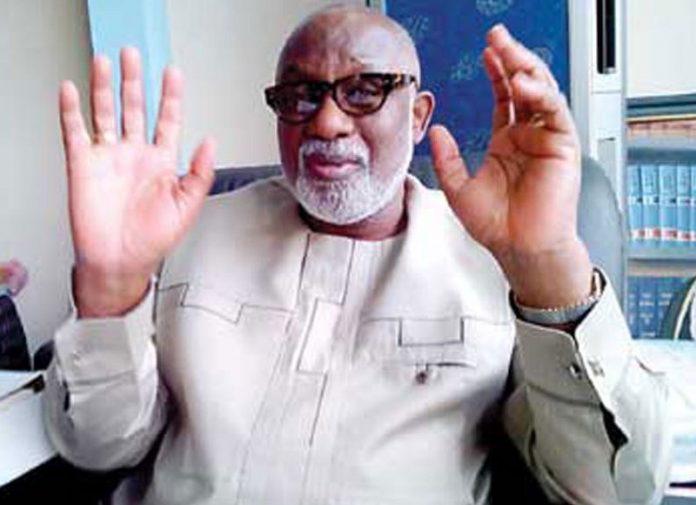 By James Sowole in Akure

The Ondo State Governor, Mr Oluwarotimi Akeredolu, has slammed civil servants in the state, describing them as “selfish” and “ungrateful”.

The governor’s comment may not be unconnected to the ultimatum given by organised labour in the state, asking Akeredolu to start payment of the arrears of salaries or be ready to face industrial action.

Akeredolu lashed out at the workers during the presentation of cheques for the payment of compensation to owners of properties affected by the construction of roads in the state.

Akeredolu said his administration has been able to put in place some life changing projects in the state despite its lean resources, while the welfare of public servants have also been given its pride of place.

“Somebody was in office and did not pay your salaries and leave allowances, but we have paid and even promoted you and people still think we have done nothing.

“l can tell you that I agree that we have not done nothing. I know it that that is how life is, people are both selfish and ungrateful.

“ln terms of welfare of workers in this state, we have done our best. No state has done better than us because we believe a worker deserves his pay.

“We are up-to-date in the payment of salaries and pensions, all officers who are due for promotion have been duly served, the 2017 leave bonuses have been paid while some workers have equally enjoyed vehicles loans,” he said.

However, Akeredolu promised to offset all outstanding arrears of workers’ salaries in the state before the end of the week.

“The Paris Club refund due to Ondo State has been received and consultation with the leaders of the workers is ongoing on how best to balance the interest of all stakeholders in the disbursement of the fund and before the end of this week we will clear all arrears and outstanding,” he said.

The governor disclosed that about N402.5 million would be paid to owners of structures affected by the construction of roads across the state.

He said paying such money was to demonstrate the state government’s sincere commitment to the development of the state and her people.

“Today marks the first phase of payment on the schedule. The quantum of money we are paying today is a demonstration of our good intention to the people whose properties were affected one way or the other.

“The payment is to make it easy for them to relocate, acquire new properties and continue life without hardship or encumbrances,” he said.

He stated that about N9 billion has been spent on the construction, maintenance and rehabilitation of roads statewide by his administration in the last one year as part of his government’s resolve to fulfil its electioneering promises to the people.

“As I speak, the state government has intervened in the construction and rehabilitation of several roads which have had profound impact on the lives of the people.

“The failed sections on the Akure-Owo-Akungba road are being rehabilitated despite the fact that the road should be the responsibility of the federal government.

“The rehabilitation will cover 10 critical segments of the road and the quality of the job is such that the perennial failures often witnessed on the road would be consigned into history by the time the rehabilitation is over,” he said.