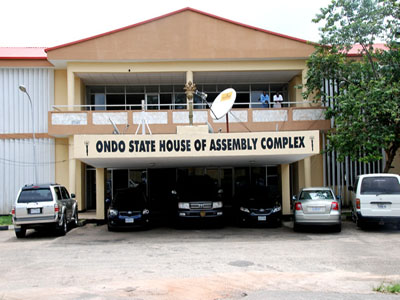 The youths had been on peaceful demonstration at the entrance of the Assembly along Igbatoro road in Akure, the state capital since last Sunday against the outgoing state governor, Olusegun Mimiko decision to present the 2017 budget and some bills 21 days to the end of his ‎tenure.

They were also chased away on Wednesday ‎when news filtered in that the governor would be presenting the last budget of his administration.

Already, there was a crack among the lawmakers as two factions led by Hon. Malachi Cokers and Hon. Jumoke Akindele are laying claim to the leadership of the parliament.

Coker’s faction had hijacked the Assembly by resuming every day to perform their constitutional plenary sessions, while those who were in Akindele’s camp and also loyal to Mimiko had shunned the Assembly.

The drama ensued when Mimiko and his aides attempted to enter the Assembly but was rebuffed by the protesters, who allegedly barricaded the road.

In the process, the police was said to have allegedly shot sporadically to disperse them thereby leading to many of them sustaining injuries.

The governor immediately drove away from the spot of the incident.

Our reporters, who were at the Assembly premises, noticed heavy security presence at complex.

Coker’s faction, who are 13 in number were still holding their plenary session as at the time the incident occured.

The state Commissioner of Police, Mrs. Hilda Ibifuro-Harrison was seen entering the Complex.

One of the lawmakers, who spoke in confidence said the CP asked them to leave the complex but they insisted that they would complete their sitting for the day before leaving the hallowed chamber.