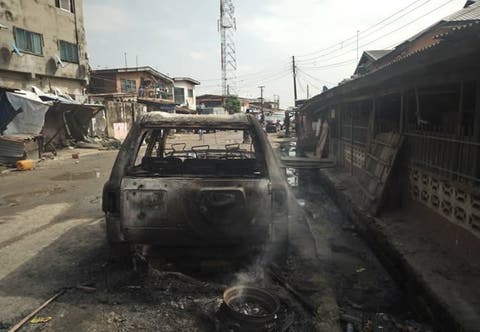 A vehicle was set ablaze in Abuja on Monday morning following a clash between #EndSARS protesters and individuals suspected to be hoodlums.

The Federal Capital Territory Commissioner of Police, Bala Ciroma, confirmed the incident, saying there was no loss of life.

The FCT police spokesperson, ASP Mariam Yusuf, in a statement, titled, ‘Commissioner of Police FCT calls for calm,’ explained that the clash was between #EndSARS and pro-SARS protesters.

The command also confirmed the death of an #EndSARS protester, Anthony Onome, who died as a result of injuries sustained during an attack by suspected hoodlums in Kubwa on Saturday.

The statement read, “The Commissioner of Police FCT Command, Bala Ciroma, has called for calm among protesters, following a clash between the EndSARS and Pro-SARS protesters at the Central Business District in the early hours of Monday, October 19.

“Preliminary investigation reveals that no life was lost; however, one vehicle was set ablaze during the clash. In view of this, the Commissioner of Police has ordered a discreet investigation into the incident.

“In another development, the Command wishes to outrightly condemn the violent attack on a protester by unknown hoodlums along Kubwa axis on Saturday, October 17, 2020.

“The hoodlums who infiltrated the ranks of the #EndSARS protesters attacked one Anthony Onome Unuode and left him with various degrees of injury which eventually resulted in death.”

While urging protesters to be law-abiding, remain peaceful in their conduct and shun all forms of violence, Ciroma reassured the residents of “his unflinching commitment to the protection of lives and property within the FCT.”