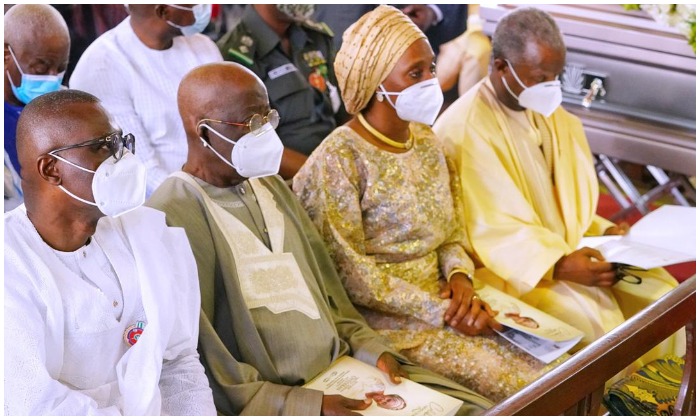 Vice-President Yemi Osinbajo and his wife, Dolapo Osinbajo; All Progressives Congress chieftain, Bola Tinubu; and former Interim APC National Chairman, Bisi Akande, were in Ibadan, the Oyo State capital, on Friday, for the burial of the late Chairman of the African Newspapers of Nigeria Plc., Reverend Omotola Oyediran.

The burial service, held at the All Saints Church, Jericho, Ibadan, also had in attendance captains of industry, academicians, politicians, and other eminent personalities from all walks of life.

The retired Archbishop of Methodist Church, Nigeria, Most Reverend Ayo Ladigbolu, in his sermon, said the late Oyediran took after her parents, the late Chief Obafemi Awolowo, and the late Chief Hannah Awolowo, in service to humanity, kindness and integrity.

The clergyman maintained that the virtues of the Awolowo family rubbed off on her and were evident in the impactful life which she lived.

Recalling the exploits of great Nigerian women such as the late Olufunmilayo Ransome-Kuti, Efunroye Tinubu, Efunsetan Aniwura, Moremi Ajasoro, among others, the clergy said, “Today, we are celebrating a woman of virtues and valour, who gave much love and support from her homebase to Nigerians.”

Ladigbolu, who read from the second book of Timothy, chapter 1, verse 5, stated, “We are celebrating a woman from great parentage. While celebrating Oyediran, we cannot forget the influence and massive impacts of her parents on the citizenry. Whatever attributes God had endowed Oyediran with, she got it from her parents.

Omotola, the eldest daughter of the late sage, was to celebrate her 80th birthday on December 1 but passed on October 17.