The Department of State Services has invited the Chairman of the Christian Association of Nigeria in Osun State, Rev. Elisha Ogundiya and some Muslim leader’s in the state over the looming crisis in public schools following a court verdict on the use of hijab in public schools.

Justice Jide Falola of the Osun State High Court had on June 3 have a verdict that Muslim students should be allowed to wear hijab in all public schools in the state because it was part of their fundamental rights. 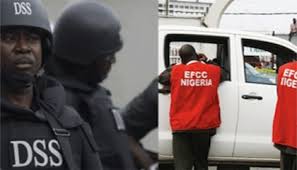 The CAN had held an emergency meeting following  the judgment and threatened that it would direct Christian pupils to start wearing choir robes and other religious  garments to schools should the state government implement the judgment.
A source told our correspondent in Osogbo on Sunday that the CAN chairman and other Christian leaders as well as Muslim leaders were invited separately by the  DSS in Osun State.
The source said, “The CAN chairman and some leaders were  invited by the DSS officials in Osogbo last weeks Wednesday. They were invited based on the crisis which the court judgment on hijab is likely to cause.
“Some Muslim leaders were also invited the following day on the same matter but I did not know the details of the two meetings.”
The CAN chairman when contacted by our correspondent on the telephone confirmed the invitation.
He said, “I was invited by the SSS director and I told him that we are peace loving people. We are not at war with anybody but we will direct our children to start wearing choir robes and any church garment they like to schools if the state government decides to implement the judgment that Muslim children are free to wear hijab to schools founded by Christian missionaries.
“If wearing hijab is their right, then wearing of choir robes to schools is the right of our children as well. It is very simple. We are not fighting with anybody on this.”
Meanwhile, the Muslim community has urged the CAN to respect the court judgment on hijab.
The Vice President of Osun State Muslim Community, Alhaji Mustapha Olawuyi, said this at a press conference in Osogbo on Friday.
Olawuyi said there should be no argument concerning the implementation of the court judgement on wearing of hijab which was the fundamental rights of female Muslim students in public schools in the state.
Olawuyi said, “Muslims in Osun State are not concerned with what anybody wears to schools, we can only advise the Christian body to do things within the limit of the law. If the Christian body  feels that the right of Christians has been violated, they  should approach the court and seek redress.
“We are not oblivious of the decision of CAN to appeal the verdict of justice Falola but we have not received any notice of appeal.”
Olawuyi commended Falola on the judgment which he said was delivered without fear or favour.
Post Views: 0