The Benue State Police Command has launched a search for a man who murdered his wife last Sunday.

The suspect simply identified as Dedoon beat his wife to death in Adekaa suburb of Gboko in Gboko Local Government Area of the state. It was gathered that the fleeing husband had locked up the room while he battered his wife to death before escaping through the window. 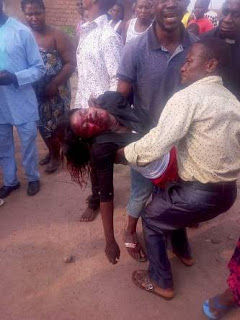 Spokesperson for the Command, Moses Joel Yamu, who confirmed the incident,  said the man killed his wife on Sunday, August 20, around 3:30pm in their apartment located at Joseph Tiah Street, Gboko North.

“The police got to the scene and took her to the hospital where she was confirmed dead while a blood stained axe believed to be the murder weapon was recovered at the scene,” Yamu said.

Mr Yamu added that the command is working to arrest and prosecute the fleeing suspect.