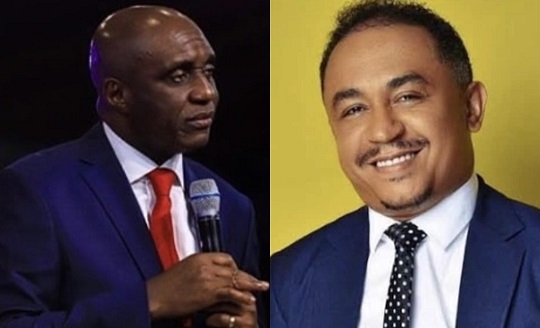 Ibiyeomie, who described Freeze as a “bastard”, “half-caste born by a Somalian” with no wife and a poor job, threatened to deal with the On-Air -Personality legally and spiritually.

Ibiyeomie spoke on Sunday in reference to comments Freeze made during the week.

Ibiyeomie took a moment to deviate and address the alleged public attack on his ‘religious father.’

Oyedepo had made a post on Instagram captioned, ”The only way to a fruitful marriage is total submission on the part of the wife.

“Until it is in place, every other thing she tries to do will be out of place. A woman who refuses to submit to her husband is disobeying God.

”As a woman, you might even be a minister of the gospel, and your husband is not, the word of God still says submit yourself to him.

”A submissive woman is precious in the sight of her husband – Ephesians 5:22.”

Responding to the post, Cool FM broadcaster, Daddy Freeze posted: ”The fact that you have been married for 30 years doesn’t necessarily make you an expert on marriage. A prisoner in prison for 30 years is still not an expert on the penitentiary system.

”Also, the fact that you are single, separated, or divorced doesn’t disqualify you from giving marital advice. Paul and Christ gave most of the New Testament advice on marriage and neither was married.”

He added: ”Many religious marriages are endured not enjoyed. Many pastors are suffering in silence.”

The statement did not go down well with Ibiyeomie as he branded Freeze fatherless and called him a half cast from Somalia.

He said he would not sit back and watch anyone insult his spiritual father while he was alive.

“Tell Daddy Freeze, the day I hear him talk about my daddy again if I don’t finish him. Insult me, I wouldn’t mind but insult Oyedepo, that bastard.

“Any day I hear him talk about Oyedepo, do they know his father? Does Daddy Freeze have a father? That half-caste that is born by a Somalian.

“The day I hear him insult Oyedepo again, I will deal with him. Who gave birth to him? If he has a father let him show us his father’s picture.

“Somebody they gave birth to in a ship, does he look like a Nigerian? That’s a Somalian. I can’t let him insult my father.

“I curse the day he was born. If I’m alive and you insult my father, I will tear you into pieces. Those who have fathers don’t insult fathers.

“He can insult a father because he doesn’t have a father. Tell him oh! This is the last time he talks about Oyedepo again. He is a bastard.

“A man who can’t marry, he has no wife. He can’t manage his home; he is coming to talk on television. Is it not his wife who left him?

“A broadcaster, does he have a good job? I can’t be alive and you insult my father, that person is not born. I will kill you; I will tear you into pieces.

“Very soon I will arrest him and charge him and see which money he has. I will charge him to court, I will follow him with law, follow him spiritually, I will fight him till he crashes. How much does he have?

“I will fight him to the point that he will say which kind of trouble is this. Someone that is a newscaster, how much does he earn? Someone who is trekking in Lagos… He will soon go to the cemetery.”