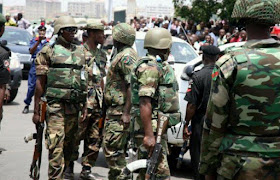 Two children of T.J Abdallah, an infantry officer who called Nigerian service chiefs, “Nollywood actors” in a private WhatsApp group have died in a car accident as the family travelled to visit him in detention in Maiduguri, Borno State, after he became incommunicado for several weeks.

The Abdallah family driver also perished in the auto crash while his wife, who suffered serious injury in the crash was left battling for her life, sources familiar with the matter told this newspaper.

Mr Abdallah, a lieutenant Colonel and commanding officer (CO) of 151 battalion stationed at Banki Junction, Borno, criticised the military hierarchy for what he described as poor management of the war against terror in the Nigerian north east region.  He made the remarks in a WhatsApp group operated by the 49 regular cadet class of the National Defence Academy (NDA).

An army investigation into the activities of the WhatsApp group indicted Mr. Abdallah, describing his comments as “seditious and derogatory” against the nation’s political and military leadership, slurring him as a fifth columnist in the Nigerian Army.

Knowledgeable sources in the army said he was also recommended to be relieved of his command, subjected to vetting, and put out of future consideration for “any command or sensitive appointment.”

Mr. Abdallah’s difficult journey to this awful hurt started with his November 2016 arrest; his subsequent detention; all culminating in the tragic loss of his children on January 7, according to accounts of several sources familiar with the case.

The grief-stricken infantry man was released to freedom two days after the tragedy.

For his family, it was an untried path to a sad journey. Worried that she had not heard from her husband for weeks, and fearing the worst had happened, Mr. Abdallah’s wife travelled to Maiduguri  from Jaji, Kaduna State on two occasions to make enquiries about his whereabouts but on both occasions got no clarity from army authorities one source said.

On January 7, 2017, however, she decided to travel with her children to seek more information about her husband’s whereabouts. At the outskirts of Maiduguri, they got involved in a deadly auto crash  that killed his two children and the family driver PREMIUM TIMES was told.

She was left fighting for her life with a fractured neck and two broken legs, those familiar with the matter said.  Newsmen could not ascertain his whereabouts on Wednesday. He could also not be reached to comment for this story.

Army spokesperson, Sani Usman, a brigadier general, declined comments saying he had nothing to say because he was not given opportunity to speak before the first part of this story was published.