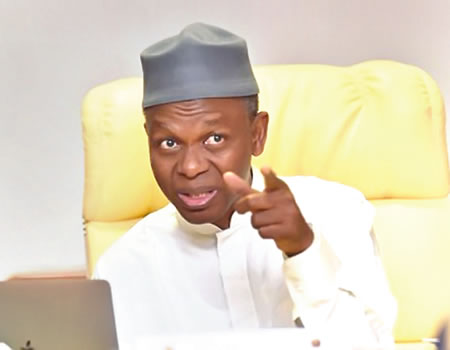 Intensive lobbying is currently going on among core loyalists of Governor Nasir el-Rufai of Kaduna State with the aim of making the ministerial list expected from President Muhammadu Buhari. The governor’s right hand men and their foot soldiers, it was gathered, are not sleeping or taking things lying low over the issue.

A reliable source told the Nigerian Tribune that “the issue of nominating a minister this time differs from what was obtainable from the past”, adding, “The usual intrigues and power play among top politicians of the wining party are no longer there. This time around, the present All Progressives Congress (APC) under Governor el-Rufai doesn’t have such zoning arrangement like the past successive governments of the Peoples Democratic Party (PDP) which had ruled the state.

“Moreso, with the current political developments in the state, Governor el-Rufai will have the final say on the list of those who will make the ministerial list. This is because he is now in full control of the government and the party. All those who might have engaged him in intrigues and power game have been pushed out of the party. For instance, the likes of Senator Shehu Sani, Senator Suleiman Hunkuyi and Isah Ashiru (PDP’s governorship candidate in the last election) are no longer in the party.”

Prior to the coming of the el-Rufai administration in 2015, it was learnt that geographical location, religion and tribe were factors considered in picking a ministerial nominee. Other criteria also considered were loyalty and background of such a nominee.

A former member of the PDP, Ibrahim Abdullahi, said most of the former ministers were usually picked from the southern part of the state because of their geographical location, religion and tribe. He said the southern part has produced more ministers than the northern axis of the state. He disclosed, for instance, that Kaduna South had produced the likes of Nenadi Usman as Minister of Finance, Felix Hassan Hyet as Minister of Environment, the late Isaiah Balat and the late Ibrahim Yakowa, among others.

On the other hand, Kaduna North had produced only two ministers in the persons of Hajiya Hadiza Mailafiya who was Minister of Environment and the present Minister of Finance, Hajiya Zainab Shamsuna.

The Nigerian Tribune gathered that the people of Birnin Gwari who are located in the western part of the state have never produced a minister and they are now calling on the governor to pick one of their own as the ministerial nominee for the state.

A member of the Birnin Gwari Vanguard for Security and Good Governance who spoke on the condition of anonymity said, “We are being marginalised and this time the security situation in our area has made it necessary to pick one of our own as minister. The highest office an indigene of the area has occupied is the Head of Service. Even at that, the present Head of Service was appointed by Governor el-Rufai. Without mincing words, the people of the area deserve more and the only thing left is to appoint an indigene as a minister.”

However the people of the southern part of the state are still interested in getting a ministerial appointment. They hinge their argument on the recent political developments in the state. A chieftain of the PDP in the area, Ayuba Samuel, maintained that all the important positions are now being occupied by Muslims from northern Kaduna.

He said “the governor is a Muslim; the deputy governor-elect is a Muslim. The governor has started campaigning for the outgoing Speaker of the state House of Assembly, a Muslim, to return as Speaker. The present Head of Service is a Muslim and probably the present Secretary to the State Government who is a Muslim may be retained in the next dispensation. The only thing left now is to have a southern Kaduna Christian as a minister.”

However, a member of the APC from Kachia, Alhaji Husseini, noted that the opposition PDP cannot lay claim to any position in this dispensation, saying, “This is because southern Kaduna have put all their eggs in one basket (by voting for PDP). So, they have lost out and, honestly speaking, I don’t think anyone from the area would be appointed a minister.”

The Nigerian Tribune gathered that the state deputy governor, Yusuf Bala, is being considered for a ministerial position. As one of the governor’s trusted allies and who is also very close to President Buhari, he might make the final list of ministers.

Apart from the outgoing deputy governor, a group, the Concerned Southern Kaduna Youths, is drumming support for the director general of el-Rufai’s campaign organisation, Mr Ben Kure, to make the list. One of the youths, Auta Ibrahim, contended that “Kure has remained one of the ardent supporters of the governor since day one when he met with the governor. Since that time, his admiration for the governor has not changed.”

According to Ibrahim, “Kure is one of the very few southern Kaduna indigenes that believe in the administration of Governor Nasir el-Rufai. So, we want the governor to consider him, especially now that they want the youths to be part of the next government.

There is also the outgoing Commissioner for Budget and Planning in the state, Alhaji Sani Abdullahi Dattijo, who is also tipped to join Buhari’s next cabinet. Young and intelligent and still in his early thirties, Dattijo left his plum job at the United Nations (UN) to assist the governor in running his government.

What is going for this young man is his intellect and mastery of economics. He was said to have designed a master plan for Kaduna State that will launch the state unto the road to economic emancipation and development. It was said that, with his experience and international connection, he would assist Buhari’s administration if he finally makes the list.

The current Minister of Finance, Hajiya Zainab Shamsuna, may also find her way back as a minister in the expected new federal cabinet. Alhough a close family friend said she would want to rest, having put on her best in running the economy, some other interests however feel that she is not yet done and that she has plenty of years to work for the country.

Another source revealed that Hajiya Shamsuna is being tipped to be the next governor of the Central Bank of Nigeria (CBN), when and if the current occupant of the seat, Anthony Emefele’s tenure expires and is not extended. A source very close to el-Rufai further disclosed that the governor is making moves for her to become the first female governor of the Nigerian apex bank.

The present managing director of the Nigerian Ports Authority (NPA), Hadiza Usman, is another potential ministerial nominee. Since the inception of the present administration, the NPA boss has been in the good books of Governor el-Rufai. She was the governor’s Chief of Staff before her present appointment. It is said that she is being considered for a ministerial appointment in recognition of her role in revamping the ailing ports in the country. A source revealed that “under her watch, those Nigerians considered as untouchable were not only touched but were asked to pay for unaccounted revenue to the coffers of the government.” Indeed, the backers of Hadiza Usman believe she will easily fit into the next federal cabinet.

Given the array of very competent people from within the state, Governor el-Rufai is said to be in a dilemma over who to pick as a ministerial nominee. A closed confidant of the governor who pleaded for anonymity said “the governor is really not finding it easy as he has a list of competent people in front of him.

“If given the chance, they will all make the list, but only few names will be submitted to the president.”