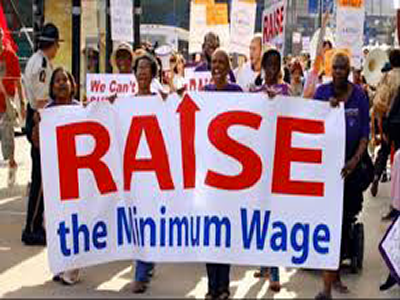 The presidency, yesterday, insisted that President Muhammadu Buhari was yet to take a position in mentioning a particular figure as the new national minimum wage for Nigerian workers. Special Adviser on Media and Publicity to the President, Femi Adesina, in a statement, accused politicians of playing politics over the matter. According to the presidential spokesman, President Buhari, who is committed to a new minimum wage, would, however, allow the process to follow due process.

He said the Executive arm of government would subject the recent recommendations of N30,000 by the Tripartite Committee on the Review of National Minimum Wage to a review before sending a bill to the National Assembly for passage into law. “The President never mentioned any figure. What he committed himself to was a new minimum wage, and only after the report of the committee has been reviewed by the executive and legislative processes of government and an appropriate bill presented to him for assent.

“Until the proposed minimum wage has gone through the whole gamut of law-making, President Buhari, who is a stickler for due process, will not be caught in this unnecessary web of controversy, which amounts to putting the cart before the horse and hairsplitting,” Adesina said. The presidential aide continued that, “the Presidency is concerned over recurring reports alleging that President Muhammadu Buhari has reneged on earlier acceptance of the N30,000 recommended as the new National Minimum Wage by the National Minimum Wage Tripartite Committee.

“These reports are contrary to what transpired on Tuesday when the committee presented its report to the President. Responding, President Buhari, while acknowledging the concerns raised by government on affordability and labour’s focus on meaningful increase, stated clearly in a speech, which was made available to the media: “In a way, both arguments are valid.

I want to assure you all that we will immediately put in place the necessary machinery that will close out these open areas. “Our plan is to transmit an Executive Bill to the National Assembly for passage within the shortest possible time. I am fully committed to having a new National Minimum Wage Act in the very near future. “As the Executive Arm commences its review of your submission, we will continue to engage you all in closing any open areas presented in this report. I, therefore, would like to ask for your patience and understanding in the coming weeks,” he added. Adesina explained further that, “as for those who have latched onto the concocted controversy to play cheap politics, we appeal to them to remember that elections are not won through loquaciousness, and trying to demean the President at every drop of a hat. But then, it is not surprising, as they have nothing else to sell to Nigerians, if they don’t ride on the name of the President. Stiff judgment awaits them at the polls.”

But the Nigeria Labour Congress (NLC), has said President Buhari cannot decide to pick a figure of his choice besides the N30, 000 submitted by the New Minimum Wage Tripartite Committee as consensus figure. It also said that the implementation of a new minimum wage for workers was a step-by-step process.

The union made this known yesterday in Abuja, while reacting to a statement issued by the presidency, insisting that the President was yet to take a position in mentioning a particular figure as the new national minimum wage. The Head of Information, NLC, Mr. Benson Upah, explained that the process includes the constitution of a tripartite committee, followed by the transmission of the figure agreed by the committee to the President, who in turn would forward the agreed figure to the National Assembly for endorsement before it was returned to the President for assent to be passed into law as new wage for workers. “The issue of minimum wage is a process; first, there must be acceptance to review and implement a new wage; the second stage is setting up of a committee which was done in 2017. The third stage is for the committee’s work to arrive at a consensus figure through the process of tripartism.

“The committee had representatives from the organised labour, employers of labour, and Buhari was amply represented by the governors. They met, deliberated, reviewed statistics, made consultations before the figure was arrived at and submitted to the President to forward this figure as an executive bill to the national assembly, who will look at it, deliberate on it and send it back to the President and it becomes a law. “He had representatives at the level of the committee. Government was amply represented. If it were within the province of the President to just pick a figure, a tripartite committee would not have been set up in the first place,” he said.