The call for an end to police brutality and reform of the force gained more support across the country on Tuesday, as more states joined in the #EndSARS protest.

The protest, which was largely peaceful, held in many parts of the country with some confrontation with security agencies.

In Abuja, soldiers prevented the protesters from gaining access to the National Assembly.

The soldiers also assaulted the some of the protesters and an Arise TV cameraman, who was covering the rally.

The protesters were moving towards the National Assembly complex entrance when the soldiers blocked their path and ordered them to turn back.

The youth in their hundreds chanted, ‘End police brutality’, and knelt while singing the national anthem.

But about five armed soldiers swooped on them and the Arise TV team and assaulted them.

They also snatched the Arise TV camera and disrupted a live coverage of the demonstration.

It is the second time security operatives would attack the Arise TV journalists in 48 hours.

In Adamawa State, the police dispersed a group of youths, who attempted to protest. 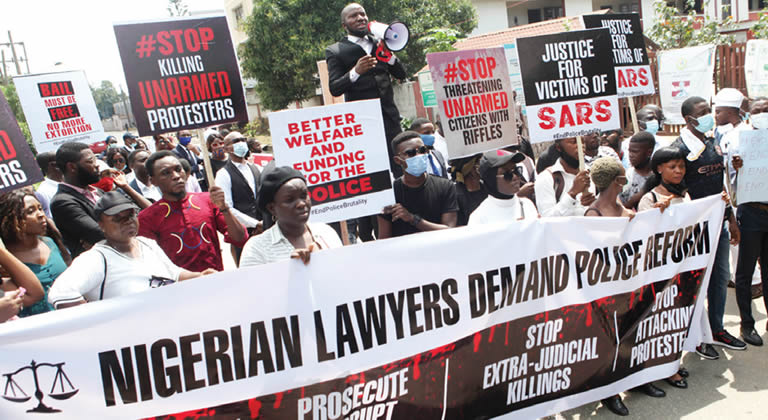 One of them, who spoke to PUNCH Metro on condition of anonymity, said they wanted to stage a peaceful protest from the Police roundabout to the office of the Commissioner of Police.

In Rivers State, where Governor Nyesom Wike had placed a ban on protests, thousands of youths marched in Port Harcourt to the Government House, where they demanded that Wike addressed them.

The protest brought social and economic activities to a halt.

Veteran Nollywood actress, Hilda Dokubo; ex-Big Brother Naija housemate, Tacha; and popular comedian, K. O. Baba, among others, were among celebrities at the protest, which led to a complete lockdown of the city.

Wike, who joined the protesters later, called for a total reform of the police force.

He said, “I never supported us to be here. I took an oath to protect the lives and property of the people of the state.

“Rivers State is a state in this country that has suffered in the hands of SARS. When we raised the alarm about SARS activities, they did not give attention. When it happened in other places, you want me to listen.

“I will not do that. No governor in this country can say they have challenged SARS the way we have done. When there was so much kidnapping in this state, I raised an alarm to the Federal Government. They said it was politics and I prayed to God that it should be all over the country. It has now gone round the country; it is no longer politics.

“I am the only governor that has come out to start end SARS protest. No other state. We have lost so many people in this state to SARS. No state supported us. SARS has killed our people a lot. The same SARS has killed in another state, they want me to protest, I will not. Rivers blood is important to me. Rivers State cannot play a second fiddle role.

“I will do what is right at all times. Every Nigeria must support the reform of the police.”

In Lagos, the agitation for an executive order from the President, Major General Muhammadu Buhari (retd.), approving the five demands of the #EndSARS protesters continued with the youth blocking major highways and preventing vehicular movement.

The protesters converged on the tollgate in Lekki and the Lekki-Ikoyi Link Bridge, the secretariat end of the Lagos-Ibadan Expressway, the Allen roundabout, Akowonjo and Abule-Egba, among other areas in the state.

Speaking at the protest in Ikeja, musical artiste, Eedris Abdulkareem, demanded that in addition to ending police brutality, tariffs and taxes enslaving Nigerian youths should be abolished.

In Lekki, celebrities, including Folarin Falana, aka Falz the bad guy; Jude Abaga, aka MI; Paul Okoye, aka Rudeboy; Banky W and Seyi Awolowo, among others, were seen protesting alongside the youth.

Commuters trapped in the gridlock for hours disembarked from their vehicles to trek to their various destinations.

In Osun State, youths in Osogbo, Ilesha and Ile Ife trooped to the streets.

Protesters, upon sighting the operational van of the Federal Fire Service on the Osogbo/Gbongan Road attacked the vehicle.

Both the rear and back screens were smashed, while two of the occupants of the van were also injured, as the driver drove onto the police premises in Oke Baale, Osogbo, to escape from the mob.

Another protester dies in Ogbomoso

Another victim, Ibrahim Abdulganiyu, who was on Sunday shot during the #EndSARS protest in Ogbomsoo, Oyo State, is dead.

A former Vice-Chairman, Ogbomoso Central Local Council Development Area, Chief Ademola Olawale, stated this in an interview with one of our correspondents on Tuesday.

He said the 19-year-old victim, who lived in the Saja area of the town, was buried immediately.

Another resident of the town, who confirmed that the death toll had risen, said he heard the news of Abdulganiyu’s death on Ajilete FM (Broadcasting Corporation of Oyo State).

Recall that a bystander, Jimoh Isiaka, was killed on Saturday during the protest against the in the town.

There was gridlock for several hours in parts of Ibadan, the state capital, on Tuesday as protesters besieged major roads in the metropolis.

The aggrieved youths, bearing placards with different inscriptions, chanted anti-SARS songs as they moved down major streets in Ibadan to press home their points.

Some lawmakers in the Oyo State House of Assembly expressed solidarity with the protesting youths, which comprised artistes, students and members of the #RevolutionNow Movement.

In Kaduna, the police arrested two protesters who joined their counterparts to demand an end to SARS and police brutality.

They were eventually released on the orders of the state Police Commissioner, Umar Muri.

The protesters, who were in large numbers, lamented how SARS operatives had over the years unleashed terror on them.