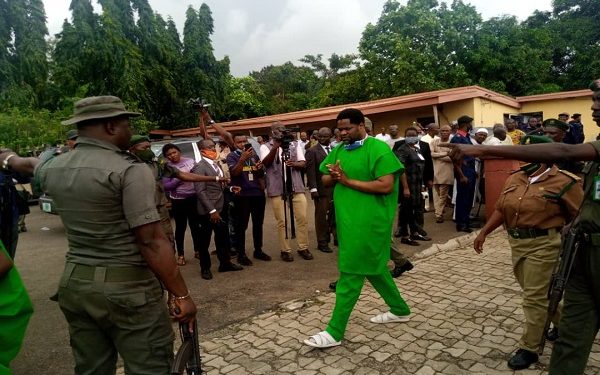 Members of the Sotitobire Praising Chapel were in tears at the premises of the Akure High Court after their spiritual father, Prophet Babatunde Alfa, was sentenced to life imprisonment over the case of a missing child in the church.

Some cursed under their lips as they struggled to catch a glimpse of Prophet Alfa being taken away to a Correctional Centre.

Alfa was sentenced after 11 months legal tussle over the mysterious disappearance of a 13-month-old boy, Gold Kolawole from his church.

Five workers of his church were also jailed as they were found guilty of the two-count charges of conspiracy as well as aiding and abetting kidnapping preferred against them.

In his judgement that lasted over five hours, Justice Olusegun Odusola, held the accused were convicted based on the circumstantial evidence presented by the prosecution.

Justice Odusola condemned in strong terms the complicity, connivance and compromise of the Ondo State Police Command in the missing child saga.

Odusola ruled the lackadaisical attitude of Prophet Alfa showed his involvement in the disappearance of Gold Kolawole from his church in November last year.

Prophet Alfa and the five church workers were sentenced to seven years imprisonment on count one, which bordered on conspiracy to commit felony to wit, aiding and abetting kidnapping.

The Judge handed down life imprisonment on count two bordering on aiding and abetting kidnapping contrary to and punishable under the Section 5 of the Ondo State Anti-kidnapping and Anti-Abduction law 2010.

The 7th defendant, Peter Anjorin, was discharged and acquitted for lack of substantial evidence from the prosecution.

Anjorin was accused of destroying evidence contrary to and punishable under Section 123 of the criminal code law of Ondo State 2006.

Justice Odusola also struck out an application by Prophet Alfa’s counsel, Olusola Oke, seeking to vacate his order that he should be investigated.

The judge had earlier ordered that Oke be investigated by the DSS following some allegations raised by the Attorney General and Commissioner for Justice, Adekola Olawoye.

The church was burnt down by a mob after Gold’s disappearance.

Gold has not been seen till date.