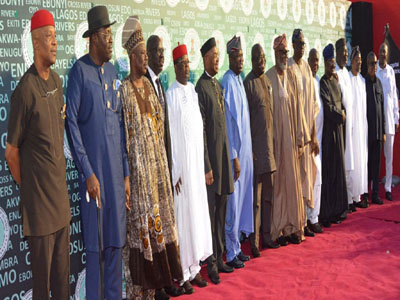 States in the Southern part of the country yesterday reiterated their belief in true federalism within the context of a united Nigeria.

In a communique after the first meeting of the 17 Southerm states 12 years after the Forum was inaugurated, the governors also said the south required more infrastructure from the federal government.

They also agreed to continue to collaborate as partners in progress.

Imo State Governor Rochas Okorocha is the only governor who did not attend and failed to send a representative.

Ambode said states would benefit from the envisaged restructuring.

He said the goals of true federalism, which included the strengthening of autonomy and the enhancement of fiscal viability, would enable the states to develop at their own pace, based on their peculiarities.

Ambode, who hosted the meeting of the 17 Southern governors last night, said the forum had achieved an increased awareness on the sustenance of the national question that is germane to peaceful co-existence in the country.

However, he said a lot needed to be done and achieved, stressing that true federalism required urgent, meticulous and proactive attention by the forum.

Ambode frowned at what he described as the non-periodic review of the revenue formula as provided by the constitution to reflect evolving realities.

He said the review is crucial to enhance the viability of states and local governments and their capacity to fulfil their developmental roles in the polity.

The governor added: “States are disparaged for always carrying begging bowls to Abuja in quest of hand-outs from the Federal Government. This is a function of our present national constitution that burdens the Federal Government with activities and responsibilities that rightly fall within the province of states.

“The productivity and revenue-generating capacities of most states are thus stifled, thus turning them into no better than street beggar states incapable of even meeting routine obligations of paying workers’ salaries and pensions without federal support.”

Ambode recalled that Lagos State had fought and won several legal battles since 1999 that systematically strengthened its autonomy and enhanced its fiscal viability.

Ambode said these victories belonged not only to Lagos but also to other states, adding that, if Lagos could achieve so much by fighting alone, the Southern Governors’ Forum would accomplish more through collective planning and strategy.

The governor said the forum had been reactivated at the time the National Assembly is harmonising its differences over the 1999 Constitution amendment which will soon be transmitted to the Houses of Assembly for approval.

He said: “It is important for this forum to comprehensively look at the proposed amendments with a view to working with our respective Houses of Assembly to ensure a coordinated response on our part that will strengthen the practice of democracy, federalism, constitutionalism and the rule of law.

Ambode clarified that while pushing for greater devolution of power, responsibilities and resources from the centre to the states, the goal of the forum is neither to a weak centre and strong states and vice versa.

The governor paid tribute to former Lagos State Governor Bola Ahmed Tinubu for his initiave, recalling that he hosted the first meeting of the forum in Akodo Beach Resort, Ibeju-Lekki, when he was at the helm of affairs.

He said while the initiative was received with mixed feelings at the time, Tinubu was vindicated later because of its achievements as the forum became a vocal voice on matters of critical importance, not only to the Southern Nigeria, but to the country as a whole.

He added: “Another major victory won towards strengthening the country’s practice of true federalism was the declaration by the Supreme Court in 2002 that the then prevalent practice of the Federal Government deducting monies from the Federation Account as a first charge for the funding of Joint Venture Contracts, the NNPC priority projects, servicing of Federal Government’s external debt, the judiciary and the Federal Capital Territory (FCT) and other federal obligations were illegal and unconstitutional.

“The Supreme Court in that case abolished the special funds created by the Federal Government to enable it draw funds from the Federation Account to pay for matters that fell within its exclusive responsibility before sharing whatever was left with states and local governments.”