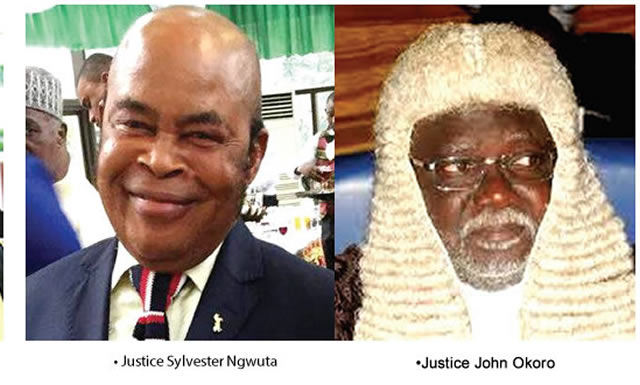 The two Justices of the Supreme Court, Sylva Ngwuta and Inyang Okoro, who were among some judiciary officers recently arrested by the Department of State Services on corruption allegations, have voluntarily withdrawn from further participating in the proceedings of the apex court.

The PUNCH learnt on Sunday that the two senior judiciary officers would no longer sit until when they were able to clear their names.

It was also gathered that both Ngwuta and Okoro had not been sitting since they were released after their arrest along with some other serving and compulsorily retired judges between October 7 and 8.

The outgoing Chief Justice of Nigeria, Justice Mahmud Mohammed, was said to have disclosed this at a meeting, which he held with a delegation of the Nigerian Bar Association in his chambers last Thursday.

According to a source, who attended the meeting, the CJN ruled out the call for the suspension of the two justices of the apex court or any of the other arrested judges.

The CJN was said to have told the NBA delegation that the affected Justices of the Supreme Court had, on their own, decided to withdraw from further sittings of the apex court.

The source stated, “The CJN made it clear that the NJC could never have suspended the arrested judges in the absence of any evidence presented by their accusers.

“The CJN said the DSS, which levelled allegations against the judges, had not presented any evidence against them to the NJC on which any possibility of suspending them could be based.

“But he said the two affected Justices of the Supreme Court had, on their own, recused (withdrawn) themselves from sitting until when they are able to clear their names.

“The CJN made it clear that the two Justices of the Supreme Court were not on suspension.”

The NBA President, Mr. Abubakar Mahmoud (SAN), was said to have led the lawyers’ delegation, comprising some national officers of the association, to the meeting with the CJN.

The meeting of the CJN, who is retiring on November 10, with the NBA delegation, was convened to harmonise the seeming contrasting stances of both parties on the fate of the judges arrested by the DSS.

While the NBA president had reportedly called for the suspension of the judges pending when they would be able to prove their innocence, both the NJC and the CJN, who is also the Chairman of the NJC, had separately said they did not have the power to suspend the affected judges.

Our correspondent, however, gathered that both the CJN and the NBA stuck to the positions they had held before the meeting.

But the source described the meeting as “fruitful” as both parties were said to have been able to understand each other’s positions better.

The source said, “They were able to explain the positions they each took to each other more clearly.

“The CJN explained why the NJC could not suspend the affected judges in the absence of any evidence.

“The NBA president, on his part, also explained that he actually did not call for the suspension of the judges but that he only called on the affected judges to recuse themselves until they were able to clear their names.

“The NBA president said the association’s position was to save the institution because having judges with corruption allegations hanging over their heads or even arraigned for criminal offences still sitting, would cause a lot of collateral damage to the institution of the judiciary.

“But the NBA stuck to its condemnation of the procedure adopted by the DSS without recourse to the NJC.”

The CJN was also said to have told the NBA delegation that the NJC sometimes was not getting sufficient cooperation from some state governors to discipline judges.

The source added, “The CJN cited an instance when the NJC recommended to a state governor the compulsory retirement of a judge, but the governor never approved the recommendation.

“At the end of the day the judge remained on the bench until he attained his statutory retirement age and he is now entitled to getting his full retirement benefits.”