Skip to content
You are here
The Special Adviser to the President on Prosecution, Okoi Obono-Obla has reacted to the public outrage on the reinstatement of wanted former pension boss, Abdulrasheed Maina. 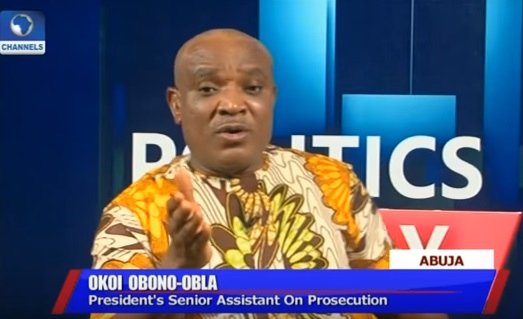 While speaking on a Channels TV programme, Sunday Politics, Okoi Obono-Obla, the Special Assistant on Prosecution to President Muhammadu Buhari, said that no court had found former chairman of Presidential Task Team on Pension Reforms, Abdulrasheed Maina, guilty of corruption as insinuated.
He disclosed further the the fact that the Economic and Financial Crimes Commission (EFCC) declared Maina wanted did not mean he was guilty, saying that people were just speculating, adding that “I do not know if any court of competent jurisdiction has found Maina guilty of corruption.”
The Presidential aide said President Muhammadu Buhari has no concern with the employment, discipline and promotion of civil servants.
He said one cannot be adjudged as guilty even if the EFCC pronounced him wanted, adding that only the court of law can declared anyone guilty.
He said, “If the EFCC declares me wanted, that does not not mean I have been adjudged guilty.
“It is only a court of competent jurisdiction that can adjudge anyone guilty. Are you sure that there is a charge against this man? If there is a charge against him, has it been brought to the notice of the ministry where he works? Has it been brought to the attention of the Federal Civil Service Commission?
“It is not enough to say this man has been accused of committing an offence. I want you to convince me that he has been found guilty by a court of law.”
Background:
1. Abdulrasheed Maina was dismissed in 2013 by the Federal Civil Service Commission following a recommendation by the Office of the Head of Service.
2. He was accused of massive pension fraud scheme amounting to more than N100 billion.
3. Maina sued the Senate, after the upper chamber issued an arrest warrant against him.
4. Maina was dismissed by the Head of Service for allegedly absconding from duty and attempting to evade arrest and charged to court.
5. Reports recently emerged that Maina has returned to the country, now works with the government and has been promoted.
Post Views: 0