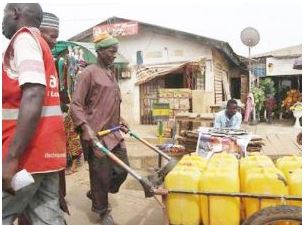 In the recent past ,prostitution was known as an illicit trade exclusively for women. Another angle has arisen; now men who offer sex for money now abound. Of course, it is the new fad in the city’s many suburbs. SOLOMON AYADO writes on the ugly secrets, rising crime-rate and the role played by drugs in these suburbs.

Shortly before the former minister of the Federal Capital Territory (FCT), Mallam Nasir el-Rufai, pushed for the demolition of pockets of slums which were sprung up in the city centre, next to high-brow areas, in most cases, the increasing wave of crime, the pressure on what little infrastructure the city could boast of was almost at its highest, increased prostitution was blamed for the rising incidence of rape and the trade in deadly weapons. Worse, drug-dealing was a shadow waiting to engulf the overwhelmed FCT administration.

Though there were worries that the then FCT administrator was championing the purging of the city-centre of its poor, gradually, crime shifted to the outskirts and the city’s rich could be heard heaving sighs of relief.

In spite of this notion, the then administrator was intent on explaining that the demolition exercises were part of efforts to enforce the Abuja Master-plan and, in the process, enforce a more peaceful, coordinated life deserving of the city-centre’s dwellers.

The slum notorious for crimes and prostitution then was Mabushi and, within the city, somewhere in Wuse, Zone 4. These spots were ‘hot’ and popular for those willing to unwind.

The night-life was something else, as trade in illicit substances soared, second only to the money-in-exchange for sex game.

Several administrations in the city had tried but failed to curb the madness brewing in the city, to no avail. But, somehow, el-Rufai’s demolition returned sanity and all was quiet for a while. The snag was this; most of the thugs, petty criminals and prostitutes relocated to new settlements in the city’s outskirts and, gradually, business returned.

Today, the popularity of these slums have soared, with many in the city centres finding themselves there every weekend, letting down their hair and unwinding to their satisfaction.

From Gwagwa, Karmo, Wumba, Jabi, Kado Kuchi, to Kuchingoro, Aleyita, Gbadema, more ghettos keep springing up within the Abuja municipal, but, with a new worry in tow.

While prostitution has become a part of daily living in these areas, a new monster has reared its head; men have now joined the fray and now prostitute themselves for a few quid.

While the women of easy virtue hunt for men who need a good time, the men are on the prowl for women who scratch the itch. In the end, while the women are getting paid for rendering their services, so do the young men. Everyone is happy.

When LEADERSHIP Weekend visited some of these areas to ascertain things for itself, it learnt that many of these springing slums have become hideouts for criminals who terrify the city centre, drug dealers and a crime-infested zone.

Just as the age-old vocation, the men who are now a new breed come in all shapes and sizes and for patrons of all preferences – homosexuals, transsexuals, bisexuals, the whole works.

Tucked into somewhere in Asokoro, Gbadema Village (popularly called ‘Asokoro’ extension) is one which is difficult to miss, especially, since the main forms of mobility are bikes and tricycles. A few minutes away from the diplomatic establishments and lodgings of the 36 states of the Federation, this place thrives uninterrupted.

Occupied mainly by low-income earners and the unemployed, accommodation in Gbadema is relatively affordable, in stark contrast to its more comfortable host. Also, it is quite close to the city.

According to a business woman who identified herself as Madam Ngozi, she had lived in the area for quite some time. Since she moved here, she has seen, she confessed, every form of activity thrive.

“Every kind of business thrives here and the housing is affordable. Many people prefer to live here, because it is nearer to the city. There are lots of prostitutes here; the young girls do not come out in the day, but, at night, they own the place.

“The men are also into it and they have their rooms where they do their thing; only that many of them deal in drugs. The women who come to those men come at night, so that no one can see them. They sneak in, get service from the men, pay them and disappear. These women, “she continued, “agree with the men on how many rounds they can go, because the men are so strong that they can go many rounds without stopping,” the intrigued woman explained with a twinkle in her eye.

In Gwarimpa, the approach is slightly different, seeing as it is considered the enclave of the rich, with its mix-march of musicians, movie stars and politicians.

When LEADERSHIP Weekend visited the place, several slums were located, their main distinguishing factor being the shanties and shacks, especially, along the buildings’ materials’ area.

Very quiet and plain during the day, these axes transform at night, coming alive with insufferable noise levels, as call girls of all categories, shapes and sizes, hang along busy roads, sashaying and calling attention to themselves. The men are more hidden and quite difficult to come by. Most times, enquiries about their whereabouts go unattended, as they do not trust anyone, given the position of the nation’s laws.

In Jahi, another slum which has remained existent, despite several efforts to demolish it, commercial motorcyclists hold sway, be it day or night and, as if on cue, with the settling in of dusk, the prostitutes, both female and male (more difficult to distinguish), drug dealers and criminals come out to search for patrons and matrons, as discreetly as they can.

Another slum in Durumi, near the National Assembly quarters, Apo, bordering Area 1, is a market place for food items and food vendors during the day, but becomes a different market at night, where a different form of buying and selling takes place.

Long threatened with demolition, aspects of the eye-sore have been demolished, but, somehow, sprung up again, to the chagrin of the FCDA. Today, the area is fast becoming notorious for its crime-rate and high-level prostitution.

“Aboki, this place is not a small area o. Everything happens here and, if you want women, you can get them immediately, any age or shape. Apart from the major road linking this place, we don’t have streets here and every passage you see is a road. Life here is not coordinated and many people who have houses here are expecting demolition anytime soon,” revealed a motorcyclist who simply gave his name as Adamu.

In that small strip of what is left of the old Utako District, now called Kpana, the occupants may just be a few hundreds, but it does serve the needs of a number of customers from around the city-centre. Like all the other slums, this one accommodates both the prostitutes, petty thieves, hard-core robbers and their ilk.

From Kpana up to the fringes of the popular Eden Garden, scantily-clad girls swing and roll their eyes, as they await customers in the dark, occasionally illumed by the headlights of oncoming cars

When LEADERSHIP Weekend visited Kpana Village, a provision shop operator who gave his name as Uche, amused, said: “That is how the area is; they don’t sleep here and those girls you see along the road reside here.”

When asked why he and not relocated, Uche answered that business was good and, “at least, we do not know when demolition may come.”

In Jabi, the dark is not needed for business to thrive; from as early as 5:30, this area, opposite Southern Fried Chicken and Mr Biggs, just after ‘Upstair’, begins to thrive.

Many who have experienced the place first-hand call it “Sodom and Gomorrah”, because of its evil influence on the young people in the area.

Decency is the most wanted virtue here, as bevy of girls as young as 17 loudly chew their gum, pretend to ignore the men and roll their eyes, as they laugh to low-tone jokes in the dim lights. They pour from the brothels inside the ghettos, get their ‘customers’ go back inside and business is concluded.

A native, a Gbagyi man, would not complain against the trend. He feels the young people are being ‘schooled’.

“We are the original owners of this place but the city has developed to surround us. This place is like a school as all the manner of girls and boys you see here are like students to the institution. Anything you want here is available. As you can see them rolling out in the evening as if they are going for lectures, this is how it is done here every day.”

A barber in Jabi Village, who gave his name simply as Oni, spoke to LEADERSHIP Weekend.

“My brother, life is full of surprises. There are guys here who are commercial sex workers. They offer hot sex to women that come to them every day. Some of these women are drug addicts and unmarried. Some of them are actually looking for husbands but their sex urge is too much, so they settle for hard guys, like two or three, to pound them and they pay heavily.”

In Gishiri, all one needs to be pointed to a male prostitute is to ask the right question at the right place. Notorious for its increasing population of homosexuals, popularly called Dan Daudu, very little is done in secret in Gishiri.

While the females puff at cigars and marijuana, as they await their customers, the male are more discreet and easily disappear, unless the enquirer is honest about his intentions and is confirmed to not be a cop.

Effeminate-looking and minding their business, it is difficult to get a second look from the males, as they go about, their ears open and their eyes darting from shadow to shadow; though most of them are rumoured to have some of society’s crème as their clients.

“There are lots of them here,” disclosed a resident who would not even give his name. “But they are extremely careful, because of what the laws of the nation say. They know many want them dead or imprisoned, so they are careful. There are male prostitutes too; as the women call out to their male clients, so do the men call out to their female clients. It is total business here.”

For many, this is bizarre.

Just when the FCT administration thought it had curtailed the activities of prostitutes, criminals and the various unwinding spots were beginning to know peace, one more worry has been added.

For many who live in these slums who go about their businesses, though, they feel they are being given a bad name and these crimes are calling unnecessary attention to them and could put them at risk of losing their accommodation if the areas are demolished.