The National Leader of the All Progressives Congress, Asiwaju Bola Tinubu, has said there is no one who is committed to the rule of law and good governance that would be opposed to the ongoing #EndSARS protests by the Nigerian youths.

Tinubu, in a statement on Monday, said the protests, which had gone on for 12 days, were justified, given gross human rights violations and impunity by the now disbanded Special Anti-Robbery Squad of the Nigeria Police Force.

He also commended Nigerian youths for the level of organisation that went into the protests, saying it showed a new level of consciousness that could strengthen Nigeria’s democracy.

He said the ongoing resistance by the youths against police brutality was reminiscent of the emancipation struggle against the colonial rule and military dictatorship, which gave birth to democracy.

However, Tinubu said the protesters must admit that the regime of the President, Major General Muhammadu Buhari (retd.), had “acted with commendable dispatch by not only scrapping SARS but also accepting the five-point demand that triggered the protests.”

He said it would only be fair for the youths to call off the protests and give the regime a chance to implement the reforms they had demanded.

Tinubu’s statement on the protest, which he personally signed, was titled, ‘#EndSARS protests – The remedy for national maladies is more, not less, democracy’.

He said, “It is impossible for anyone truly committed to the rule of law, democracy and good governance to be opposed to the concern and demands of the protesters. There is no way that any society can make meaningful progress without the enthronement of these values.

“The protesters have, for the better part of the commencement of their civil action, conducted themselves with an admirable sense of responsibility, restraint and maturity. This is commendable. Indeed, the high level of organisation demonstrated by the protesting youths shows a new level of consciousness of the capability of a vigilant civil society as well as the efficacy of people’s power. This can only ultimately strengthen the country’s democratic evolution and sustainability.” 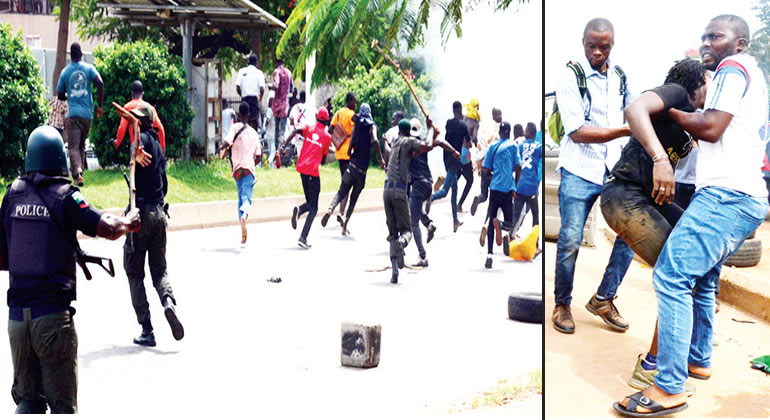 While urging the protesters to withdraw, Tinubu said Buhari had showed “a laudable sensitivity to the grievances of the youths.”

He said, “It is only fair that government must be given the chance to implement the reforms demanded by the protesters. This can certainly not be done instantaneously by the waving of a magic wand. If government had not implemented promised reforms in the past, the swiftness with which it has responded to the demands of the protesters this time around shows that that there is a positive change by government both of attitude and of a new sense of urgency.”

Tinubu urged the youths to be careful not to fritter away the considerable gains they had made within a very short period with “lack of moderation and strategic thinking”.

He said it was unfortunate that hoodlums, thugs and assorted criminals had begun to take advantage of the protests to perpetrate violence and disrupt civil life.

He said he believed the intention of the organisers of the protest was not to “cause generalised anarchy or effect regime change.”

Tinubu warned the youths that if they gave the impression that their intention was to effect a change of regime “then any government will necessarily have to act with the requisite decisiveness and force to restore law and order and preserve constitutional rule.”

However, he said the ruling APC must see the protest as “an opportunity to go back to the drawing board and recommit itself to the values for which the party was formed through extraordinary hard work, dedication and commitment.”

The Fulani group claimed that the #EndSARS protest, allegedly being financed by Tinubu, was aimed at bringing down the regime of the President, Major General Muhammadu Buhari (retd.).

This, the group claimed, was because Tinubu had lost out “in the plans to contest the presidential election under the All Progressive Congress in 2023.”

The Fulani group warned that they won’t take it lightly with Tinubu should anything untoward happen to their kinsman.

They said this in a statement titled, ‘#EndSARS: Gathering of political vultures,’ in Kaduna on Monday.

According to them, the continued protest despite government’s yielding is an attempt to ground the country and create more suffering in the midst of the COVID-19 pandemic.

The group demanded that Tinubu should call off the #EndSARS protest and allow the Federal Government to fashion out modalities to address the nation’s challenges.

Alleging “ethnic and regional colouration” to the #EndSARS protests, they added, “Some people from certain regions are trying to undermine and overthrow a democratically-elected government or intimidate the North to give up its rights to rule beyond 2023.

“The insistence to continue to protest even when government has made concessions; the open defiance is reckless, provocative; denial of access to means of livelihood can lead to fracas and conflict.

“The demands of the protesters are nebulous, inconsistent, haphazard, whimsical, and impossible to meet.”

When contacted, Tinubu’s spokesman, Tunde Rahman, said, “As it has been stated elsewhere, Asiwaju Tinubu could not have sponsored the #EndSARS protest that has blocked one of the main entries into and out of Lagos and one of the economic arteries of the Lagos State Government. He could also not have sponsored such a protest where he too has been labelled a target by the organisers.”

Meanwhile, the Chairman, Caretaker/ Extra-Ordinary National Convention Planning Committee of the APC, Governor Mai Mala Buni, has alleged that there was a hidden agenda behind the nationwide #EndSARS protests.

Buni, who granted an interview with the Hausa Service of the BBC monitored in Abuja, on Monday, alleged that the refusal of the protesters to back down even after the Inspector-General of Police disbanded the Special Anti-Robbery Squad showed that they had other objectives.

He said, “When such things happen, there are those with ulterior motives. This is a nation where you have people with their own agenda.

“There are those asking for restructuring, some are secessionists, there are also criminals who see the disbanded unit as a threat to their activities. We should be careful.

“All leaders, irrespective of party affiliation, must come to their senses to realise that we must first have a peaceful Nigeria before they can attain whatever they want to achieve but if they instigate people to take to the streets for selfish reasons, it can only lead to chaos.”

Buni said Buhari didn’t realise the extent of the rot within the system until he assumed office five years ago.