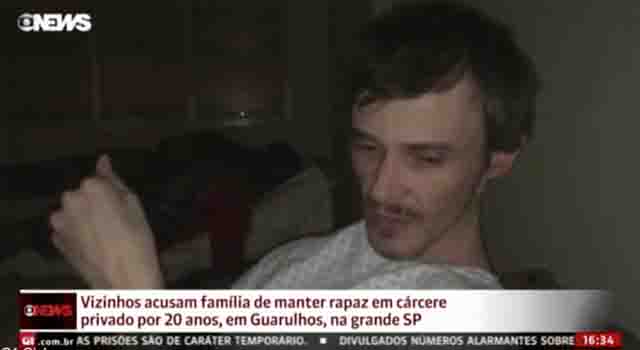 Armando de Andrade was accidentally discovered while the police were searching homes for members of a drug gang.

Armando who was said to have disappeared when he was 16, was reportedly tied to a bed in a tiny, windowless room of their house in Sao Paulo, but neighbours were told he had travelled.

According to witnesses, he was found with ‘enormous’ toenails and fingernails and a long beard which had grown to his knees, while police officers who found him described him as ‘malnourished’.The police believe he lived in virtual darkness for two decades in a room without light fittings, while the floor was reportedly covered in human faeces.

Police chief, Celso Marchiori, said, “He got up, very impaired and didn’t speak a word. We took him outside and he still didn’t say anything. We didn’t know if he was scared or drugged.

“He wasn’t able to identify us as police officers. We called for help and he was taken straight to hospital.

“It’s difficult to believe he was in that place for 20 years. It’s a very insanitary place, he wouldn’t have survived. There’s no light at all.”

Neighbours in the Guarulhos district of Sao Paulo, southeast Brazil said Armando was a normal 16-year-old, who liked skateboarding and playing the guitar, when he suddenly disappeared.

They said his family always claimed he had moved to another part of Brazil and was ‘doing well’.

Armando’s childhood friend, Ederson Silva, said, “Whenever we asked about him they always said the same thing, he’s living in the northeast, he’s well, he’s working, he’s building his family there. That’s all they said to us.”

Armando’s father, Amancio de Andrade, has denied holding him captive, claiming his son left home when he was 18, returned last week, and asked him to lock him in the room to help him ‘get clean’ from drug addiction.

The father said, “He’s a grown man. He never got in touch. Then last week I opened my door and he was there. I gave him food and let him stay in the basement room. He asked me to lock the door so he couldn’t get out.”