The hefty Holy Bible accented with a Celtic cross that President Joe Biden used to take his oath of office on Wednesday is a family artefact that dates back nearly 130 years which he has used during all his swearing-in ceremonies in his 50-year-old political career.

The historic leather-bound Bible, which is five inches thick, has been a Biden family heirloom since at least 1893.

“It’s just been a family heirloom on the Biden side of the family and every important date is in there,” the then President-elect told late-night talk show host Stephen Colbert last month.

“For example, every time I’ve been sworn in for anything, the date has been on that and is inscribed on the Bible.” 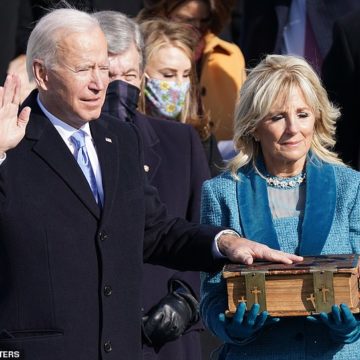 The familial artefact has followed Biden, who is a practising Catholic, throughout his 48-year political career.

The very first time he used the Bible to be sworn in as a senator took place in 1973 when he was just 30 years old.

On that occasion, Biden was sworn in at the Wilmington Medical Center in Delaware where his sons, Beau and Hunter, were recovering from a car crash that claimed the lives of his first wife, Neilia and their infant daughter, Naomi.

Secretary of the Senate, Francis Valeo, travelled to Wilmington to issue the oath of office so Biden could remain by his children’s hospital bedsides.

Biden’s late son Beau, who died in 2015 of brain cancer, went on to use the family heirloom when he was sworn in as Delaware attorney general back in 2007.

The Bible is a 19th century Douay & Rheims edition. The reason it is so large is because the historic edition contains in-depth commentary from Father George Leo Haydock – a British priest and Bible scholar.

His edition of the Douay Bible was the most popular English Catholic Bible of the 19th century.

The editions often include essays, glossaries, pop biographies and pages to record dates.

Biden’s use of his family Bible underscores the prominent role his faith has played in his personal and professional lives – and will continue to do so as he becomes the second Catholic president in US history.

Biden follows in a tradition of many other presidents who used family-owned scriptures to take their oaths, including Ronald Reagan and Franklin D. Roosevelt