Armed thugs conveyed in what appeared to be black government Sports Utility Vehicles with concealed number plates were seen attacking #EndSARS protesters in the Wuse 2 area of Abuja on Tuesday.

In a video that has gone viral on social media, some of the thugs are seen  jumping into a black Prado driven by a man in suit on Adetokunbo Ademola Crescent Wuse 2.

The vehicle is seen reversing unto Hospital Avenue and then the doors are flung open while thugs wielding stones and sticks run riot.

Another vehicle, which is a black Range Rover, soon joins the thugs while four buses filled with thugs park on the roadside as more thugs alight from the buses.

There were unconfirmed reports that the thugs were coordinated by an official of the Department of State Services attached to a top government official.

However, the DSS in a statement by its Spokesman, Peter Afunaya, denied the allegation,  adding that the agency could not identify any of the persons in the videos.

Afunaya asked members of the public to ignore such rumours as the agency could not engage in such a dishonourable act.

The statement titled, ‘DSS Not Aiding Attacks on #EndSARS Protesters’ read in part, “ Part of the untruth being spewed to the public is that some of its officials attached to certain VIPs aided thugs in this regard.

“In view of the false accusations, no DSS personnel has, so far, been identified to be involved in the alleged acts. It begs the question to conclude that SUVs and persons dressed in suits and sighted in conflict environments are of the DSS.”

The #EndSARs protesters had accused the government of sponsoring thugs to compromise the demonstrations. 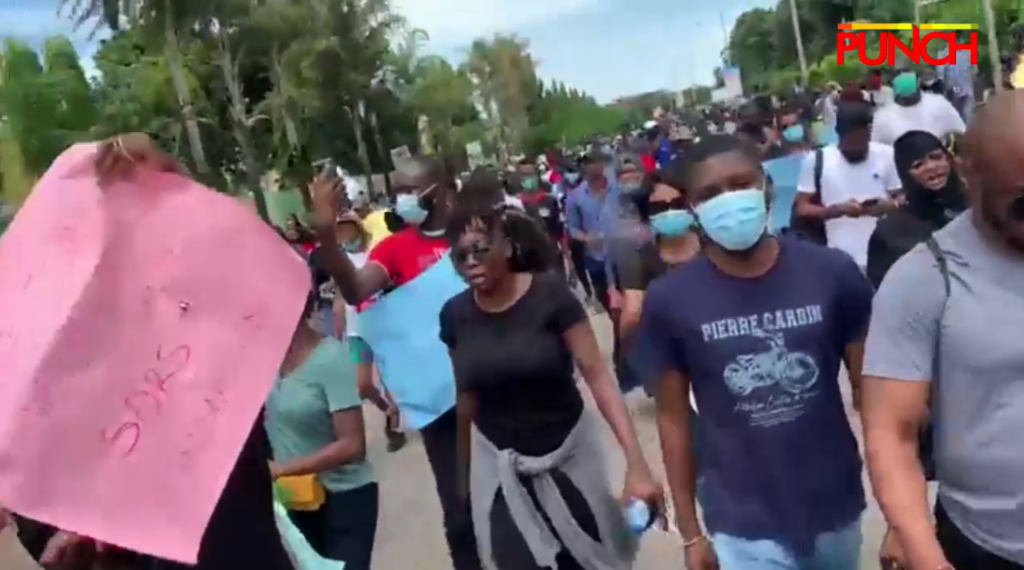 The Federal Government has claimed that “unreasonable demands” by #EndSARS protesters may lead to anarchy.

It alleged that individuals with sinister motives had infiltrated the peaceful protests and were attacking, killing and destroying property, blocking roads and causing mayhem.

The Minister of Information and Culture, Lai Mohammed, told members of the Diplomatic Corps in Abuja on Tuesday that the government had agreed to five of the demands made by the activists.

The parley was attended by diplomats from different countries.

Mohammed recalled that on October 12, the President, Major General Muhammadu Buhari (retd.) intervened when he addressed Nigerians and said the disbandment of the Special Anti-Robbery Squad was the first step in the comprehensive reform of the police.

He also recalled that the Inspector-General of Police, Mohammed Adamu, had on October 13 summoned all former members of SARS for debriefing and medical examination before redeployment, and two days later, the National Economic Council took far-reaching decisions that took care of every demand of the protesters.

The minister said what bothered the government was that after the five demands had been met, the protests, rather than abate, was getting stronger.

He told the envoys that the protesters started with five demands, but came forward with more, even as he said with every demand met by the government, the goal post was shifted.

Mohammed stated, “And the government noticed very soon that some people with ulterior motives were exploiting a very innocent and just protest to destabilise the polity.

Speaking earlier, Onyeama said the government had also seen that movements such as the #EndSARS were open and vulnerable to infiltration by those with ulterior motives and other agenda.