Before now, the world hardly knew of the intense rivalry between Ooni of Ife, Enitan Adeyeye Ogunwusi and Prince Iyiola Omisore.

But thanks to the current travails of the former Senator from Osun state and attempts by those labelled political opportunists to cash in on the situation – the deep contention between the two gladiators has been revealed.

According to SocietyNowNG, the depth of their raging fight was put on record recently by the Ooni, when he publicly declared that the former Deputy Governor has refused to pay homage since his coronation seven months ago. 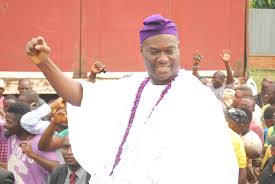 According to a knowledgeable source on the customs and traditions of Ife indigenes ‘’this is a great deviation from laid down principle that goes beyond the quarrel between the two’’.

The custom and traditions state that no matter how fierce the battle for the throne is or quarrel with an Ooni before he became an Oba of the source of Yorubas, once he is crowned – everybody fall in line, identify with him and give him all require support.

‘’Omisore by the action alleged by the Ooni has outrightly gone against the custom and traditions of Ife”, pointed out the source.

The fact remains that Omisore, a close ally of the immediate past Oonirisa Oba Okunade Sijuade is said to be totally uncomfortable with the manner the new Ooni Ogunwusi emerged.

According to another source, Omisore is one of the frontline splinter groups in Ife and Osun state in general that holds the view that Ooni Ogunwusi’s emergence is traced right to the door step of Asiwaju Bola Ahmed Tinubu in Lagos state.

They view his emergence as desecration of the long held sacred customs and tradition of Ife.

If you have been following political alignment and realignment in the South-west region since 1999, you will agree that Asiwaju Bola Tinubu and Prince Iyiola Omisore are fierce opponents.

And to make matters worse, the Ooni visited Asiwaju in Lagos and not the other way round give room for more speculations.

‘’the truth is that Ooni is yet to enjoy all required support within his domain..he is engaged in moves that makes him popular outside his terrain, especially on social media but within…he still has a lot of work to do..Omisore is just one of many others’’ another insider revealed. Omisore’s refusal to visit the Ooni is his way of protesting his emergence as the new paramount ruler on the throne of Ife. ‘’Visiting Ooni means endorsing him either publicly or privately and that comes with accepting him and the process that produced him…Omisore opted not to do that’’ the source explained

Like Omisore, the Ooni also knows the implication of what is playing out between the two, because he knows a visit would eventually mean an endorsement to curtail what he is quietly contending with in Ife and Osun state in general.

‘’Whatever is current political status or travails is..one thing you can’t take away from Omisore is that he is a major factor in Osun state, especially in Ife…he has a lot of sway with the traditional institution…he was a long term strong ally of immediate past Ooni Sijuade…is current position on Ooni Ogunwusi is in reality an outright threat to the throne, so they can never be friends as things are’’ another source privy of the matter added.

Further divide between the two heavyweights played out recently, when some prominent Peoples Democratic Party (PDP) leaders in Osun state visited the Ooni to plead with him to forgive Senator Iyiola Omisore, and help facilitate his release over allegations of N700m fraud involving the former National Security Adviser (NSA), Sambo Dasuki.

At the meeting, Ooni said he was not offended by the actions of the former deputy Governor, adding that “Omisore is a prominent Ife son. I don’t have any grudges against him whatsoever over his refusal to visit my palace since I became the Ooni. You all must know that he is entitled to his right of choice on whom and where to visit at anytime.

“Don’t also forget he is undergoing a procedural investigation and laws of the land must be respected. But I promise to assist you on this matter within my limited capability legally guided.

“I heartily pray God should quickly set him free if he has no skeleton in his cupboard.”

In a swift response to the Ooni’s comment, the embattled former Osun state gubernatorial candidate distanced himself from the Peoples Democratic Party emissaries led by the Chairman of the party in Osun State, Mr. Soji Adagunodo.

A close ally of Omisore, who is also the spokesperson for the party in the state, Mr. Diran Odeyemi, in a statement lastweek said Adagunodo’s action was tantamount to a mockery and a pretense.

Odeyemi stated, “When EFCC came after Omisore, it is logical to assume that Adagunodo group will be happy that their “enemy” is now out of the scene and away from their sight.

“It is also likely that the open display of sympathy and latter-day affection may not be genuine. How can we explain the sudden love for a man you so much hate while in freedom? Their actions and utterances may be “Oju aye” (eye service.)”

The statement added, “In their attempt to register the group as supportive of the man they despise, they started crying more than the bereaved, running around to nowhere and with no justifiable reasons for their actions and utterances.

Odeyemi said although the Ooni did not give the PDP chairman and his followers the normal respect he always accord his valued guest, he stated that the monarch used the opportunity to vent his anger on Omisore,

He said, “Oba Ogunwusi was presented a veritable opportunity to stylishly vent out his subtle anger on Omisore. Kabiyesi in his wisdom complained of not being visited by Omisore. His prayer for Omisore is loaded and more or less sounded neutrality in his matter. It is normal and expected. Kabiyesi scored a good goal from a loose ball passed to him by Adagunodo’s group.”

Unconfirmed sources however claim that apart from issues of recognition, acceptance, both Omisore and Ooni have personal grievances with roots in business dealings.

Also said to be involved in the volatile mix is said to be issue of age and inherent respect, with Omisore obviously the older.