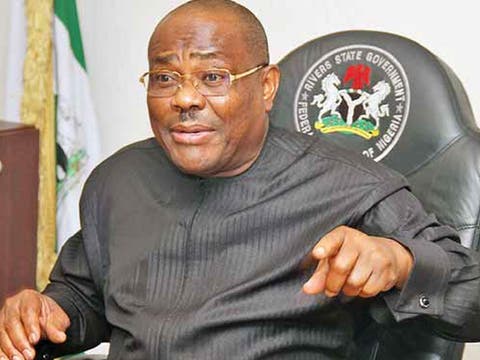 Rivers State Governor, Nyesom Wike, has accused the out-going Governor of Bayelsa State, Seriake Dickson, of causing divisions in some parts of Rivers State by claiming he loves the Ijaws while actually exploiting the state oil.

This is as he appealed to the leaders of Kalabari area of the state to prevail on the Amanyanabo of Kalabari, King Theophilus J.T. Princewill, not to allow himself to be used by external forces to create disunity in the state.

Speaking during a solidarity visit by Kalabari people yesterday at the Government House in Port Harcourt, Wike said Dickson was causing division in the state by deceiving the people of Kalabari while surreptitiously taking their oil.

He expressed regret that the Amanyanabo of Kalabari deliberately allowed Dickson to use him to promote divisiveness.

According to Wike, “I want to publicly lay a complaint on the action of Amayanabo of Kalabari. The next time it happens, I will act as a governor.

“The Amanyanabo of Abonnema didn’t do it; he called me on phone when the Dickson tried to create problems in Rivers State.”

Wike said the outgoing Bayelsa State governor visited the state without getting in touch with the relevant authorities, under the guise of coming to see the Ijaw people.

“He said he was coming to see the Ijaw people in Rivers State, and he would be hosted by the Amayanabo of Kalabari and Amayanabo of Abonnema.

The Rivers State governor informed the Kalabari delegation that should the Amanyanabo of Kalabari take such ‘illegal action’ in the future, he will face sanctions.

The governor said: “That day I would have removed him, but I held myself. What they would do is to go to the radio station and abuse me, but I am used to insults. So, I am just trying to complain to you people.

“You can see how people are trying to divide a state. A fellow governor would come from somewhere to create division in our state.”

He said the outgoing Dickson professes love for the Ijaw people in Rivers State, but he is busy working to take the state oil resources in Soku and Kula.

“Already, we have gone back to court in relation to Soku oil wells. This is the man who is claiming Kula oil wells as well as that of Soku.

“We will reclaim the Soku oil wells for Rivers State in court. This is the same man you claim loves you and you roll out drums for him against protocol.

“If any of such things happen again, I will take the necessary action. I will not listen to any further excuse, and that is why I am saying this publicly. Tell him to respect constituted authority.

“It is not good for anyone to come and divide Rivers State because the state is one. It is unfortunate what my colleague did. I hand him over to God and prayed for God to do his will,” he said.

The governor commended the peace initiative of the Amanyanabo of Abonnema, and urged other traditional rulers to emulate him.

Wike said: “I thank the Amanyanabo of Abonnema for his peace initiative. I urge other traditional rulers to emulate him, work towards peace among your people because you cannot live where there is no peace.

“It is impossible to have good governance without peace. So you need peace in your domain.”