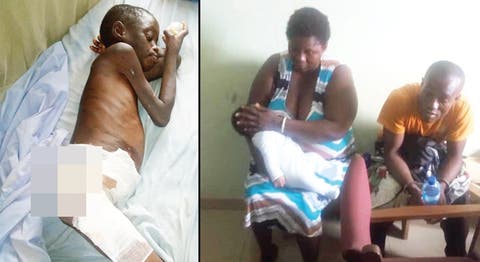 Eight-year-old Chiamaka Oha is battling for her life at the General Hospital, Uga,  Anambra State, after she was allegedly bathed with hot water by her employer, Ogochukwu Anichukwu, for licking her baby’s milk.

PUNCH Metro learnt that the victim, who hails from Ugwueme community in the Awgu Local Government Area of Enugu State, lived with her employer and the husband at their house at Nanka community, in the Orumba North LGA of Anambra State.

It was alleged that Anichukwu on September 25, 2020, poured hot water on the victim for licking her baby’s milk and shut the door against her to prevent people from seeing the injuries she sustained from the attack.

Our correspondent learnt that a neighbour who visited Anichukwu saw the maid’s condition and reported the matter to a non-governmental organisation, Human Rights Legal Aid Initiative. The NGO was said to have rushed the victim to a medical facility in the area.

PUNCH Metro gathered that another group, Awgu Egbeleli Socio-Cultural Development and Unity Forum, transferred the victim to a general hospital.

A member of the forum, Chidi Okoh, who spoke to our correspondent, said the group learnt about the incident through the social media.

He said, “When we saw a video of the girl on social media, we were moved with compassion, and we sent one of our members, Chief Sunday Nwankwo, who resides in Onitsha, to investigate the incident. When he got there, he was shocked at the inhuman act meted out to the victim by the woman and her husband.

“Chief Nwankwo settled the medical bill at the initial private hospital where the victim was taken to for resuscitation and moved her to the general hospital.

“We learnt that the girl’s offence was that she licked the milk meant for her (Anichukwu’s) baby. She poured hot water on her and locked her inside so that neighbours won’t see her in that state.

“The neighbours confirmed to have seen the girl eating sand on several occasions because of starvation. When we asked the woman why she poured hot water on the victim, she said she was bathing her baby and didn’t know when the hot water poured on her; her husband admitted to beating and inflicting injuries on her.”

The Ekwuloba Zonal Coordinator of Human Rights Legal Aid Initiative, Akaneme Chijioke, who condemned the attack, noted that the victim was in pains when the group rescued her.

He said, “There were sores all over her body. The woman used a hard object to beat her and damaged her fingernails. Her face and mouth are filled with injuries.

“The girl looked frail, hungry, malnourished and traumatised and when we asked the woman what happened, she said she mistakenly poured hot water on her. When we took the child aside to interrogate her, she said the woman was always beating her and that she never licked any milk. She also said she ate sand sometimes to stay alive.  We then went back to the woman to find out why they had not taken the girl to hospital; she said they did not have money.”

Our correspondent learnt that the matter was reported at the Uga area command and the couple had been arrested.

The Anambra State Police Public Relations Officer, Haruna Mohammed, said he was not aware of the matter.