The Minister of Finance, Kemi Adeosun, has stated that her ministry was only able to account for N91 billion recovered loot by the Economic and Financial Crimes Commission since May 2015, contradicting figures provided by the agency’s acting chairman, Ibrahim Magu.

In a letter to Mr Magu last month, the minister asked the EFCC boss to explain why the figures computed by the Office of the Accountant-General of the Federation, a department under the Ministry of Finance, did not tally with Mr Magu’s claims about recovered loot in the media.

Critics and transparency advocates have consistently demanded that the EFCC be upfront with Nigerians not just on its anti-corruption tactics but also the outcomes thereof. The agency has been pressed for details of its recovery in cash and assets since May 2015 when President Muhammadu Buhari assumed office with a promise to fight corruption.

Several members of opposition Peoples Democratic Party (PDP) who served in the Goodluck Jonathan administration or participated in botched reelection bid of the former president have been arrested with various amounts allegedly recovered from them. The EFCC had also announced recoveries of cash hauls, sometimes in millions of dollars, from homes of former administration officialsand even security agencies.

Anti-graft detectives made back-to-back recoveries after the administration’s whistle-blower policy came to force in late 2016.

Mr Magu has regularly touted his agency’s unprecedented success in the fight against corruption, especially on confiscation of ill-gotten wealth from public coffers. Last month, he said the EFCC recovered as much as N500 billion in 2017 alone.

Two months before in November 2017, he disclosed that the EFCC recovered about N739 billion within two years.

But the figures are now being disputed by the ministry and department saddled with administering the recoveries.

In her February 9 letter to Mr Magu, Mrs Adeosun said her agency had calculated all recovered funds and arrived at N91 billion (N91,383,370,501.73) in recovery loot account as at the date of writing her letter. The amount represents about 18 per cent of the N500 billion Mr Magu said was recovered in 2017 and a little over 12 per cent of the N739 billion he said had been recovered within two years.

The N91.3 billion also included assets under final and interim forfeitures and funds recovered in foreign currencies, according to an updated table of the recoveries attached to the letter.

“This is to notify you of the records of cash asset recoveries in the custody of the Economic and Financial Crimes Commission (EFCC) from May 2015 date based on information available to the office of the Accountant-General of the Federation (attached),” Mrs Adeosun said in the letter first made public on March 20 by TheDetail, an online publication.

The minister said the records failed to corroborate the acting chairman’s comments in the media and demanded detailed explanation.

“It has, however, come to the attention of the Ministry of Finance, the use of recovery figures in news media reports by the EFCC that do not reconcile with the records of the ministry,” she added in the letter which carried the reference number: FMF/HMF/EFCC/S-EFCC-REC/2018/1. “You are therefore requested to clarify where these cash recoveries have been deposited and provide accompanying evidence.”

Before Mrs Adeosun’s letter, Nigerian lawmakers have consistently demanded clarification on recovered loot under the current administration, information the EFCC is yet to provide details of.

During a Senate hearing in 2017, Mr Magu said he couldn’t immediately calculate how much had been recovered under him. 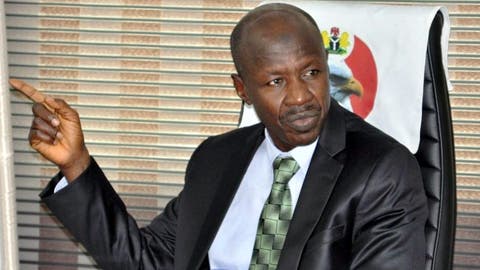 Senate President Bukola Saraki criticised the anti-corruption agencies’ handling of recovered loot as opaque and floppy, saying their actions could cast Nigeria in a bad light before the comity of nations.

“An ad hoc committee of the Senate, which is investigating some administrative infractions in the Executive, has discovered that many properties recovered from a fugitive from the law have not been accounted for by the investigating agency. This gives the global community great concern about the commitment of Nigeria to the anti-corruption drive,” Mr. Saraki said.

The EFFC dismissed Mrs Adeosun’s letter as “nothing unusual” in response to a PREMIUM TIMES’ enquiry Monday night, saying it has been transparent with its handling of recovered funds.

“There is nothing unusual about anyone asking for clarification on any matter least of all assets recovery and management which are not the simplest aspects of investigation,” said Wilson Uwujaren, the agency’s spokesperson.

“The Commission is not adverse to clarifying any issue(s) that will assist better understanding of the portfolio of assets recovered by the Commission. Indeed, it is fully engaged with other vehicles within the administration, the Presidential Audit Committee on Recovered Assets and Presidential Committee on Asset Recovery, dedicated to addressing all issues pertaining to recovered assets,” he added.

Mr Uwujaren did not, however, respond to PREMIUM TIMES’ question about whether Mr Magu was standing by his public statements that as much as N739 billion had been recovered within two years.

Earlier on Sunday, Mrs Adeosun played down the controversies generated by her letter, saying it was routine action taken to safeguard controls of recovered funds. The minister said Mr Magu had replied her and reconciliation of figures had commenced.

A social commentator says the development may show a flaw in the manner the EFCC is going about its operations.